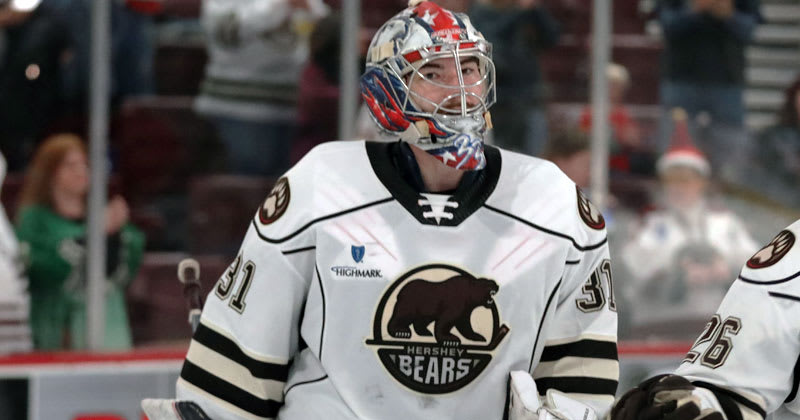 The Washington Capitals, the NHL affiliate of the Hershey Bears, announced today that goaltender Clay Stevenson has been re-assigned from the South Carolina Stingrays (ECHL) to the Bears.

Stevenson, 23, is 3-0-0 with Hershey this season. He made his AHL debut on Dec. 10 versus Cleveland, turning aside 25 shots. He earned starts on back-to-back nights the following weekend, defeating Wilkes-Barre/Scranton in a 23-save performance on Dec. 17, and turning aside 25 more shots in a win over Lehigh Valley on Dec. 18. He has a 1.96 goals-against average and a .924 save percentage with Hershey this season.

Stevenson has posted a 10-3-3 record with the Stingrays this year over 17 games, owning a 2.21 goals-against average, .927 save percentage, and two shutouts. The rookie netminder earned his first professional shutout on Dec. 3 for the Stingrays, stopping 25 shots and earning first star honors in a 3-0 victory over Savannah. He was named the Warrior Hockey ECHL Goaltender of the Week for Nov. 28-Dec. 4.

Hershey continues the 2022-23 season, presented by Penn State Health, in Allentown tonight as the Bears visit the Lehigh Valley Phantoms at 7:05 p.m. The game is available to watch via AHLTV.com and listen to on the Highmark Bears Radio Network.