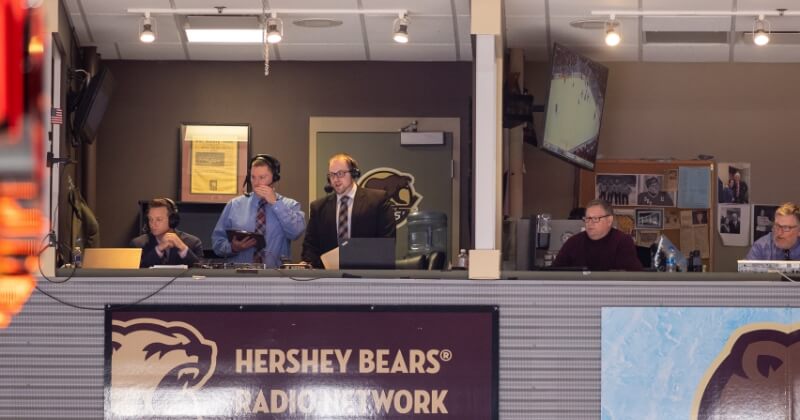 Don't miss a second of the action with the Bears Radio Network! Catch all games on Froggy Valley 100.1 FM and on Fox Sports 1460 AM. Select games are also carried on Sports Radio 98.9 FM/WOYK-1350 AM and Caps Radio 24/7. The easiest way to stream the games is via the Hershey Bears app, or you may listen online at the link below.
Click Here To Listen to Hershey Bears Hockey

Zack Fisch joined the Chocolate and White in 2016, serving as the play-by-play “Voice of the Bears”. The award-winning broadcaster also oversees the day-to-day media relations operations of the club, working directly with the local media and hockey operations department.

For his work on and off the mic, Fisch was named the winner of the AHL’s prestigious Ken McKenzie Award in 2020-21, an honor presented annually to an AHL team executive who most successfully promotes his or her own club. Fisch was just the third all-time Hershey Bear to win the award, joining Doug Yingst (1987-88) and Brent Hancock (1980-81). Fisch’s accomplishments also include being selected as a member of the radio broadcast team for the 2019 AHL All-Star Classic in Springfield, Massachusetts. He works with Hershey’s NHL affiliate, the Washington Capitals, serving as a fill-in broadcaster, while also calling prospect games, rookie tournaments, and pre-season games. Fisch made his NHL regular season debut on Feb. 20, 2018, filling in for former Bears voice John Walton on the Capitals Radio Network, and he has called nearly 20 games for the Capitals since.

Prior to joining the Bears, Fisch worked with the club’s ECHL affiliate, the South Carolina Stingrays, in 2015-16. With the Stingrays, Fisch managed the team’s media initiatives in addition to serving as the “Voice of the Stingrays” for all games. Prior to his time in South Carolina, Fisch spent three years with the Dubuque Fighting Saints of the United States Hockey League. With the Fighting Saints, Fisch broadcast the club’s championship season in 2013, and was selected to broadcast numerous league events, including the 2013 Junior Club World Cup in Russia, the 2013 and 2014 USHL Draft Show, and the 2015 USHL/NHL Top Prospects Game. The Kansas City native is a graduate of St. Cloud State University where he called SCSU hockey for four years. Fisch is a winner of 11 Associated Press Awards, and was named one of the top-10 collegiate broadcasters in the nation by Sportscasters Talent Agency of America (STAA) in 2012. In 2018, Fisch was named one to watch on STAA's Top 30 Sportscasters Under 30 list.

He currently resides in the Hershey area with his wife Krista, and son, Jaxson.

Hall of Famer Mitch Lamoureux works with the Bears Radio Network to provide color commentary and analysis. The former forward is well-known in the Central Pennsylvania area and was one of the AHL's most prolific scorers.

Hall of Famer Dave Fenyves provides color commentary and analysis on the Bears Radio Network. The former captain of the Bears helped the club to a historic 50-win season and a 12-0 run to the Calder Cup title in 1988.

Fenyves played for the Bears from 1987-93. A native of Dunnville, Ontario, Fenyves was named the winner of the Eddie Shore Award in 1987-88 and 1988-89 as the American Hockey League's outstanding defenseman and was an AHL First Team All-Star both seasons. He also captained the Rochester Americans to the Calder Cup in 1986-87, when he won the Jack A. Butterfield Trophy as the most valuable player of the playoffs, and was the first player in AHL history to captain different teams to the Calder Cup in consecutive seasons. That feat has only been matched by Boyd Kane (Philadelphia Phantoms 2004-05 and Hershey 2005-06). Fenyves also played 206 career NHL games with the Buffalo Sabres and Philadelphia Flyers.

A long-time fixture with the Bears and a familiar face to fans at Giant Center, Jim Jones not only serves as the Game Night Emcee, but also provides ice-side analysis and interviews on the Bears Radio Network for all home games.

His duties on game nights have prepared him well for his role, as he has hundreds of player interviews under his belt at ice level. As both a pre-game show host and radio analyst, Jones has the unique distinction of having worked with the last five Bears broadcasters in Dan Kamal, Dave Mishkin, John Walton, Scott Stuccio, and now Zack Fisch. In addition to his role in games, fans in Hershey have come to know him as the post game jersey auctioneer, an integral part of Hershey's commitment to the community.

Having been within the Bears organization since 1994 in various capacities, Jones experienced perhaps the apex of his tenure with the organization in the spring of 2009. He served as sideline reporter not only for Hershey's television coverage with Walton, Gregg Mace and Ed Coffey on abc-27.2, but he also served as analyst for the American Hockey League's coverage on TSN2 throughout Canada. In TSN's coverage from Vancouver, B.C. to St. John's, Newfoundland, he gave viewers north of the border the Hershey perspective of the best-of-seven series. Jones was also on the ice covering the postgame celebration from Winnipeg as the Bears claimed Calder Cup number 10 north of the border. He also anchored the Bears Radio Network's on-ice post-game coverage at Giant Center in 2010 as Hershey won its 11th Calder Cup over the Texas Stars.

A proud 1980 graduate of Penn State University, Jones is the Director of Golf Operations at Fairview Golf Course in Lebanon, part of the Distinct Golf group. He has welcomed many players, staff and families to the "off-ice home of the Bears" and constantly donates his time and resources. Jones resides in Lebanon with his wife Sue and their daughter Alex.