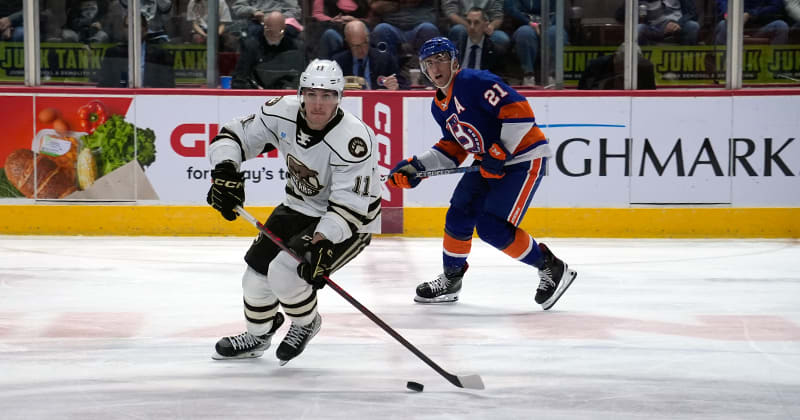 The Hershey Bears continue the 2022-23 season, presented by Penn State Health, as they conclude a four-game road trip with a pair of games at Lehigh Valley on Wednesday and Saturday, before returning home on Sunday afternoon for GIANT Teddy Bear Toss against the Bridgeport Islanders.

Friday, Jan. 20: Hershey 2 at Laval 3 (OT)
The Bears converted on a 5-on-3 man advantage at 17:18 of the first period when Joe Snively one-timed a pass from Ethen Frank past Kevin Poulin for his third of the season. Hershey took a 2-0 lead when Sgarbossa beat Poulin with a low wrist shot at 19:54 for his 14th of the season. In the second period, Joel Teasdale scored power-play goals at 12:43 and 13:21 to draw the Rocket level. Neither team broke the tie in the third period, and a penalty to the Bears in overtime led to a Laval power play that the hosts successfully converted on when Teasdale deflected a Peter Abbandonato blast past Zach Fucale at 3:53 of extra time.

Saturday, Jan. 21: Hershey 4 at Belleville 2
Both teams failed to score in the first period, but Belleville broke the 0-0 deadlock 29 seconds into the middle frame when Scott Sabourin deflected Dillon Heatherington’s shot from the high slot behind Hunter Shepard to put the hosts up 1-0. Viktor Lodin then put Belleville up by a pair of goals with a power-play strike via a one-timer from the right circle at 15:31. That set the stage for a dramatic comeback in the third, as Ethen Frank scored a power-play goal at 5:04 for his 17th of the season when he snapped a pass from Mike Sgarbossa at the left circle past Kevin Mandolese to get Hershey on the board. Beck Malenstyn tied the game with a shorthanded goal from the right circle at 9:06. Hendrix Lapierre stole the puck behind the Belleville net and fed Garrett Pilon in the slot, who then roofed his fifth of the season past Mandolese at 13:37. Frank then sealed the game with an empty-net tally at 19:07. Shepard went 23-for-25 in the win as the Bears went 1-for-7 on the power play, while the Senators went 1-for-4.

FRANK CONTINUES TO CLIMB:
With a pair of goals on Saturday at Belleville, Ethen Frank enters the week with 18 goals, good for a share of the American Hockey League’s rookie goal-scoring title. The Western Michigan University alumnus is currently tied with fellow first-year pro Thomas Bordeleau of the San Jose Barracuda, and is tied for eighth in overall league goal-scoring. The last rookie to lead the AHL in goals was Alex Barre-Boulet, who notched 34 goals for Syracuse in the 2018-19 season to lead all goal-scorers, along with teammate Carter Verhaeghe.

WE’RE GOING STREAKING:
Mike Sgarbossa and Ethen Frank both enter the week with six-game point streaks, which matches both of their previous season-highs. Both streaks began on Jan. 8 in a 4-3 win at home over Syracuse. Since then, Sgarbossa has put up 10 points (4g, 6a), while Frank has managed nine points (5g, 4a). Sgarbossa’s longest point streak as a Bear to date has been eight games (3g, 10a), set from Dec. 22, 2019 – Feb. 29, 2020.

IT’S ALMOST TEDDY BEAR TOSS TIME:
With Sunday’s GIANT Teddy Bear Toss approaching, the Bears will look to surpass their previous world record of 52,341 teddy bears and other stuffed animals, which was established during last season’s event. No currently-rostered player has previously scored a Teddy Bear Toss goal for Hershey in their career, although Shane Gersich, Aaron Ness, Mike Sgarbossa, and Joe Snively have all assisted on previous Teddy Bear Toss goals, with Sgarbossa assisting twice (2018 and 2019). Kale Kessy (currently sidelined with an upper-body injury), previously scored a Teddy Bear Toss goal for ECHL Bakersfield in 2012, while Mason Morelli scored during his junior days with the Minot Minotauros in 2012.

PHANTOM MENACE:
The Bears enter the week with a 5-0-0-0 record this season against Lehigh Valley, with nine games remaining against their I-78 opponents. Those nine contests account for over 27 percent of Hershey’s remaining 33 games; the Phantoms also account for four of Hershey’s next six games. Mike Sgarbossa leads Hershey in scoring against Lehigh Valley, with eight points (4g, 4a) in five games, while Jordy Bellerive (2g, 1a) and Olle Lycksell (1g, 2a) lead the Phantoms with three points each against the Bears. Zach Fucale is 3-0-0 against the Phantoms with a 1.34 goals-against average and a .931 save percentage, while Samuel Ersson has gotten the lion’s share of work in net for Lehigh Valley against the Bears with a 0-4-0 record, a 3.57 GAA and an .888 save percentage.

ON AN ISLAND:
The Bears have not lost in regulation to Bridgeport since Nov. 23, 2019, and have posted a record of 13-0-0-1 against the Islanders in that time. Ethen Frank leads the way with seven points (2g, 5a) against Bridgeport, while the Islanders have several players with two points against Hershey. Prior to their last encounter with Hershey on Dec. 9 at Bridgeport, the Islanders were nine games above .500 and were in the thick of the race for first place in the Atlantic Division. Beginning with its 4-2 loss at home to the Bears, Bridgeport has gone 4-12-2-1 over its last 19 games to plummet into a three-way tie for last place within the division, and now sits at only one game above the .500 line with an overall record of 17-16-6-1. The Islanders are paced by Chris Terry, with 37 points (11g, 26a) in 35 games.

LAPPY LIFTING UP:
After a quiet month offensively for December with only three points (3g, 0a) in 12 games, rookie forward Hendrix Lapierre has rebounded in the month of January for the Bears. The 2020 first-round selection of the Washington Capitals has five points (2g, 3a) in seven games so far this month. Lapierre is also playing responsible hockey, as evidenced by the fact that he has yet to be assessed a penalty in January after accruing eight minutes in penalties in December.

BEARS BITES:
Hunter Shepard’s next win will be his 12th of the season with Hershey, matching his previous career-high with any single pro team after previously hitting 12 victories with the South Carolina Stingrays during the 2020-21 and 2021-22 campaigns…Garrett Pilon has scored Hershey’s last two game-winning goals; he now has a new career-high after previously scoring one game-winner in three of his four prior seasons with the Bears…Joe Snively is two points away from his 200th pro point…Shane Gersich’s next point will mark his 100th point in a Bears sweater…Forward Mike Vecchione is one point away from 200 in his professional and AHL career…Defender Aaron Ness is four points away from his 300th pro point.