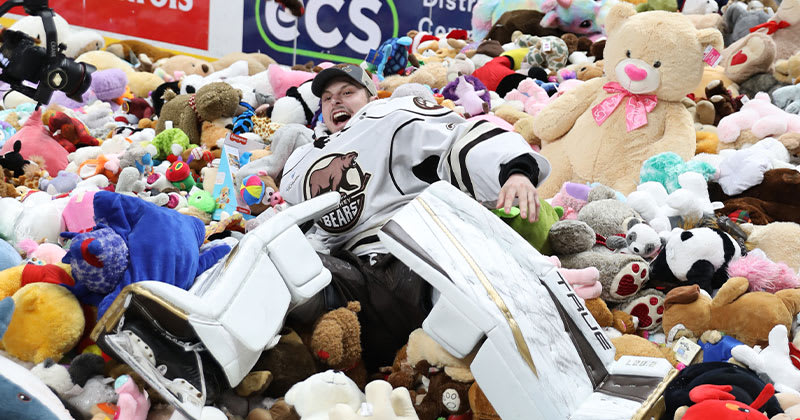 What is the GIANT Teddy Bear Toss?
In a sight that truly must be seen, thousands upon thousands of stuffed animals will come raining down on Sunday, Jan. 29 at GIANT Center. The Bears take the ice to battle the Bridgeport Islanders that afternoon at 3 p.m. and this world-famous event sees fans throw teddy bears and other stuffed animals onto the ice following the team's first goal of the game. The Bears are the world-record holders for the teddy bear toss, collecting 52,341 stuffed animals for local charities. The GIANT Teddy Bear Toss has collected 322,199 teddy bears since its inception in 2001.

How can I get tickets?
The GIANT Center is expected to be sold-out for this game, but there are very limited remaining tickets for this contest. CLICK HERE TO PURCHASE TICKETS TO THE GAME.

Who does the GIANT Teddy Bear Toss benefit?
As part of the club's Hershey Bears Cares initiative, which showcases the philanthropic activities and volunteer efforts of Bears players and staff members throughout the community, teddy bears and stuffed animals are collected and donated to more than 35 local organizations, including Dauphin County Children and Youth, Cocoa Packs, Boys & Girls Club of Harrisburg, Palmyra Lions Club, and Autism Society Greater Harrisburg Area. Additionally, the Sweigart Family Foundation has pledged that if the Bears surpass their total from last season of 52,341 teddy bears, that they will make a $50,000 donation to Children's Miracle Network.

How do I help donate teddy bears for the game?
You may donate teddy bears and stuffed animals by throwing them onto the ice when the Bears score their first goal! Thousands upon thousands of animals raining down onto the ice is an amazing sight. While we encourage fans to throw all teddy bears onto the ice, if you have too many to bring into the arena with you, there will be a collection truck outside of the GIANT Center accepting donations from 12:30 - 3 p.m. on the day of the game.

I cannot attend the GIANT Teddy Bear Toss. What are my options to participate?
Unfortunately we can only accept donations on the day of the game. From 12:30 - 3 p.m. out front of Giant Center, items can be dropped off with our staff at our collection truck. Non-ticketed guests are welcome to participate in this as well, but please note a $10 parking fee will be required to enter the complex.

I cannot attend the GIANT Teddy Bear Toss but would love to follow along. How can I do so?
Follow along on Hershey Bears social media with hashtag #TeddyBearTossHershey and #HersheyBearsCares. Sunday’s game will be broadcast in partnership with FOX43. The game will air on Antenna TV, WPMT 43.2, which can be found on Comcast 247, Verizon Fios 463, Blue Ridge Ephrata 91, and Blue Ridge Newberry/Duncannon 88. The game may also be heard across the Highmark Bears Radio Network and viewed on AHLTV.