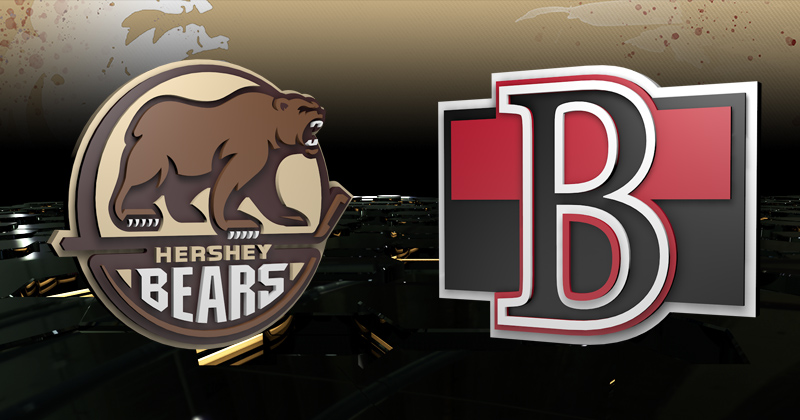 Tonight, the Hershey Bears play host to the Belleville Senators for the only time this season at Giant Center. Hershey looks to sweep the brief, two-game season-series after winning in Belleville last month.

LAST TIME OUT:
The Bears dropped a wild affair on Wednesday evening, falling to the Providence Bruins in a shootout, 7-6, at Giant Center. Hershey bolted out to a 3-0 lead early in the second period, and led 5-3 after 40 minutes. However, Providence scored three goals in the third period to take a 6-5 lead. Hershey battled back to tie the game in the closing minutes as Joe Snively scored his second goal of the game to force extra hockey. The game progressed to a shootout where Jakub Lauko scored the winner for Providence. The loss marked the first time Hershey had scored six goals and lost since a 7-6 loss at Lehigh Valley on Mar. 2, 2018. The Senators were in action last night at Binghamton and tallied three goals in both the second and third periods to win big over the Devils, 6-2. Vitaly Abramov scored on a third period penalty shot to complete a three point night (one goal, two assists), and Drake Batherson earned three helpers.

SNIVELY AND SGARBOSSA STREAKING:
Hershey forwarded Joe Snively and Mike Sgarbossa each enter tonight's contests on point streaks. Snively has caught fire of late, posting points in four straight games, notching five points (four goals, one assist) in that span. He's played in 19 games this season, and all but two of Snively's seven points this season have come over the past four contests. Sgarbossa continues to lead the charge offensively for the Bears, tallying five points (two goals, three assists) in a three-game scoring streak. He has two straight multi-point games, giving him five games this season in which he has at least scored two points. One of those five contests came in Bellville, as he potted a goal and an assist versus the Senators in a 5-1 road win on Oct. 18.

PILON PUTTING UP POINTS:
After a slow start, second-year forward Garrett Pilon is starting to come on of late, collecting points in three of his past four games. He finished Wednesday's shootout loss to Providence with three points, all assists, to up his season point total to nine (two goals, seven assists). This was the second time in Pilon's 91-game AHL career that he collected three assists, with the previous occurrence coming on Jan. 5 of this year versus Grand Rapids.

MAILLET HITS CENTURY MARK:
Forward Philippe Maillet had a goal and an assist in Wednesday's game, earning him his 100th point in his AHL career. The milestone-point came on Maillet's third goal of the season in the second period of the loss to Providence. In his 160-game AHL career with Ontario and Hershey, Maillet has complied 39 goals and 61 assists. His two-point effort in his last contest was his first multi-point game with the Bears this season. He has six points (three goals, three assists) through 20 games this year.

MANN'S SURGING SENATORS:
After stumbling out of the gates with a young club, the Belleville Senators enter tonight's game on a roll, having won four straight decisions, and posting a 8-2-0-0 record over the past 10 games. In the month of November, last years' AHL All-Star Classic MVP Drake Batherson has collected 15 points (five goals, 10 assists) in 13 games. Belleville is coached by former Hershey bench boss, Troy Mann, who served as the head coach of the Chocolate and White from 2014-18, and won a Calder Cup with the club as an assistant coach in 2010.