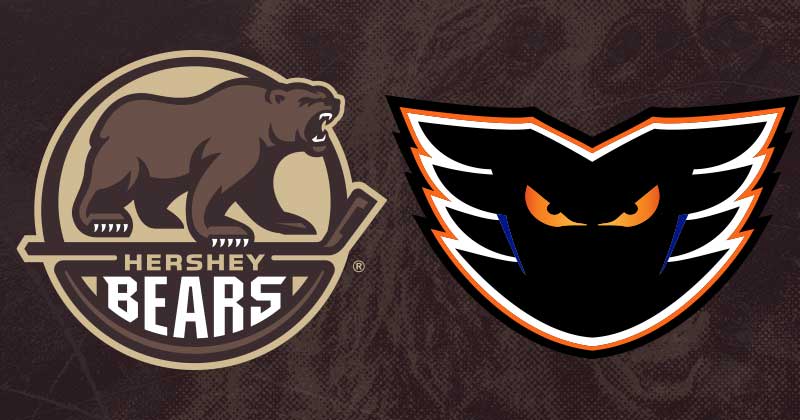 The Hershey Bears continue the 2022-23 season, presented by Penn State Health, as they face the Lehigh Valley Phantoms tonight at PPL Center, in the first of two road meetings this week between the I-78 rivals. The Bears are 1-0-1-0 through the first two games of their current four-game road trip.

LAST TIME OUT:
Hershey visited the Belleville Senators on Saturday and both teams failed to score in the first period. The Senators broke the 0-0 deadlock 29 seconds into the middle frame when Scott Sabourin deflected Dillon Heatherington’s shot from the high slot behind Hunter Shepard to put the hosts up 1-0. Viktor Lodin then put Belleville up by a pair of goals with a power-play strike via a one-timer from the right circle at 15:31. That set the stage for a dramatic comeback by Hershey in the third, as Ethen Frank scored a power-play goal at 5:04 for his 17th of the season when he snapped a pass from Mike Sgarbossa at the left circle past Kevin Mandolese. Beck Malenstyn tied the game with a shorthanded goal from the right circle at 9:06. The Bears went ahead 3-2 when Hendrix Lapierre stole the puck behind the Belleville net and fed Garrett Pilon in the slot, who then roofed his fifth of the season past Mandolese at 13:37. Frank then sealed the game with an empty-net tally at 19:07. Shepard went 23-for-25 in the win as the Bears went 1-for-7 on the power play, while the Senators went 1-for-4. The Phantoms are winless in their last three home contests, but are coming off a three-game win streak with all games coming on the road, following a 5-2 victory at Wilkes-Barre/Scranton last Friday. The Phantoms initially fell behind 1-0 after the first period, but erupted with a four-goal second frame as Wyatte Wylie (1:52), Tyson Foerster (4:21 and 16:01), and Bobby Brink (17:12) scored. Although Nathan Legare pulled the Penguins back to within two goals in the third period at 3:39, Jordy Bellerive capped the scoring for Lehigh Valley at 5:56. Samuel Ersson made 28 saves in his return to action for the Phantoms for the first time since Dec. 18.

KEEP THE STREAKS ALIVE:
The Bears enter tonight’s game with a six-game point streak at 4-0-2-0, and a road point streak of five games at 4-0-1-0. Since a 4-3 win on Jan. 8 vs. Syracuse, the Bears have gotten consistent offensive production from forwards Mike Sgarbossa and Ethen Frank, who have produced individual point streaks of their own over their last six games. Sgarbossa has put up 10 points (4g, 6a), while Frank has managed nine points (5g, 4a).

PHANTOM MENACING:
The Bears enter the week with a 5-0-0-0 record this season against Lehigh Valley, with nine games remaining against their I-78 opponents. Those nine contests account for over 27 percent of Hershey’s remaining 33 games; the Phantoms also account for four of Hershey’s next six games. Mike Sgarbossa leads Hershey in scoring against Lehigh Valley, with eight points (4g, 4a) in five games, while Jordy Bellerive (2g, 1a) and Olle Lycksell (1g, 2a) lead the Phantoms with three points each against the Bears. Zach Fucale is 3-0-0 against the Phantoms with a 1.34 goals-against average and a .931 save percentage, while Samuel Ersson has gotten the lion’s share of work in net for Lehigh Valley against the Bears with a 0-4-0 record, a 3.57 GAA and an .888 save percentage.

BEARS BITES:
The Washington Capitals re-assigned goaltender Clay Stevenson to the Bears from the South Carolina Stingrays of the ECHL earlier this morning; the netminder went 3-0-0 in three games during a previous stint with Hershey this season, including a 5-3 victory over the Phantoms on Dec. 18, 2022…Garrett Pilon has scored Hershey’s last two game-winning goals; he now has a new single-season career-high after previously scoring one game-winner in three of his four prior seasons with the Bears…Joe Snively is two points away from his 200th pro point…Shane Gersich’s next point will mark his 100th point in a Bears sweater…Forward Mike Vecchione is one point away from 200 in his professional and AHL career…Defender Aaron Ness is four points away from his 300th pro point.