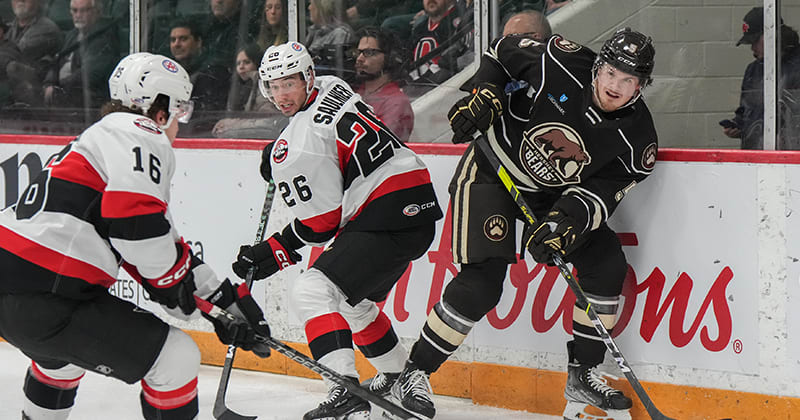 Bears Roar Back for 4-2 Win Over Senators

The win was also the Bears’ first comeback victory this season when trailing after two periods after previously going 0-6-1-0 in seven prior attempts.

Both teams failed to score in the first period, but Belleville broke the 0-0 deadlock 29 seconds into the middle frame when Scott Sabourin deflected Dillon Heatherington’s shot from the high slot behind Hunter Shepard to put the hosts up 1-0.

Viktor Lodin then put Belleville up by a pair of goals with a power-play strike via a one-timer from the right circle at 15:31.

The Bears got on the board at 5:04 of the third period with the man advantage when Ethen Frank received a cross-slot pass from Mike Sgarbossa at the left circle and snapped his team-leading 17th of the season past Kevin Mandolese. Connor McMichael received credit for a secondary assist on the tally.

Beck Malenstyn tied the game at 2-2 at 9:06 on a shorthanded rush with a shot from the right circle for his third of the season. The goal was the Bears’ second shorthanded marker of the season, with assists coming from Gabriel Carlsson and Henrik Rybinski.

Hershey took its first lead of the night at 13:37 when Hendrix Lapierre stole the puck from a defender behind the Belleville net and centered it into the slot for Garrett Pilon, who roofed a shot past the glove of Mandolese for his fifth of the season.

With Mandolese pulled for an extra skater, Frank sealed the game with an empty-net goal at 19:07, from Mike Vecchione and Sgarbossa. With his performance, Frank extended his current point streak to six games (5g, 4a) to match a previous career-high established earlier this season, while Sgarbossa also extended a six-game point streak of his own (4g, 6a).

The game marked the 600th American Hockey League game as a head coach for Hershey’s Todd Nelson; Nelson now sports a 335-197-68 record over his AHL career with Oklahoma City, Grand Rapids and Hershey. Defender Aaron Ness also played in his 700th professional game; the blueliner has 276 of those contests under his belt with Hershey, which leads all active Bears players.

Hershey continues the 2022-23 season, presented by Penn State Health, when the Chocolate and White take on the Lehigh Valley Phantoms on Wednesday, Jan. 25 at 7:05 p.m. at the PPL Center. The Bears return home to GIANT Center for their annual GIANT Teddy Bear Toss when they host the Bridgeport Islanders on Sunday, Jan. 29 at 3 p.m. All fans are encouraged to bring new, stuffed teddy bears and items to the game to toss onto the ice as the Bears score their first goal. All items collected will be donated to local charities. Purchase tickets for the game by CLICKING HERE.