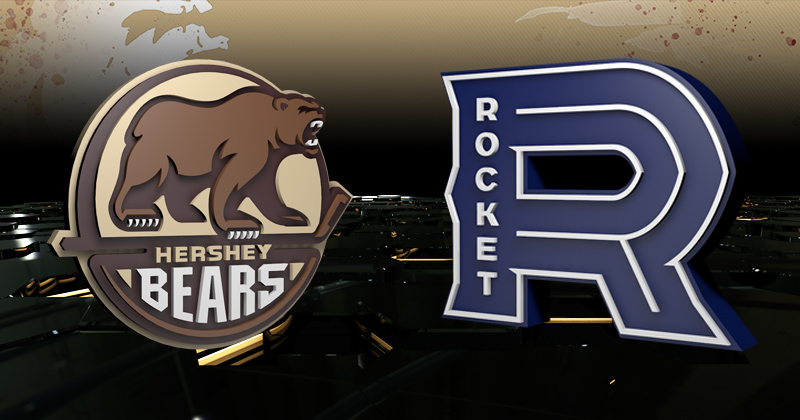 The Hershey Bears open up a four-game road trip tonight with the first of two games in Canada, as the Chocolate and White make their lone visit of the regular season to Place Bell, where they will face the Laval Rocket.

LAST TIME OUT:
The Bears concluded a two-game home set with the Springfield Thunderbirds on Saturday. Hendrix Lapierre scored a power-play goal at 3:12 of the first period for his 10th of the season, but Martin Frk then tied the score at 3:34. The Thunderbirds took a 2-1 lead with a power-play goal from Brady Lyle at 14:31. The Bears tied the game at 2-2 at 9:36 of the second period when Connor McMichael snapped a shot past Vadim Zherenko from the left wing. Garrett Pilon scored at 13:41 to put Hershey up 3-2. In the third, Ethen Frank netted his 16th of the season at 4:17. 24 seconds later, Joe Snively put Hershey ahead 5-2, and Pilon added an empty-net tally at 19:53 for a 6-2 final. Hershey went Hunter Shepard with 21-for-23 to earn his 10th victory of the season. Laval was on the road on Wednesday night, defeating the Rochester Americans by a score of 5-2. Alex Belzile opened the scoring for Laval 3:23 into the first period and ultimately finished the game with two goals and an assist after adding a shorthanded empty-netter in the third period. Peter Abbandonato (0g, 2a) and Anthony Richard (1g, 1a) also had multi-point games, while Kevin Poulin made 32 saves to pick up the win for the Rocket. Laval went 1-for-5 on the power play and 3-for-3 on the penalty kill.

ROCKETING UP TO QUEBEC:
This week’s trip to Laval will represent the farthest that the Bears travel during the 2022-23 regular season, at a distance of just over 500 miles from Hershey. The Bears have posted a lifetime record of 5-3-0-0 against Laval, including a 4-1 home victory this season on Nov. 13. Hendrix Lapierre (1g, 1a), Gabriel Carlsson (0g, 2a) and Mason Morelli (0g, 2a) lead Hershey in scoring against Laval this season with two points apiece.

OFFENSIVE EXPLOSION:
Hershey’s six goals against Springfield last Saturday not only matched a season-high for the Bears, but the team’s output over its past four games has been exceptionally strong. With a 3-0-1-0 record since Jan. 8, the Bears have scored a total of 18 goals, for their best offensive stretch of any four-game cluster this season. Not coincidentally, the Bears have converted with the man advantage in each of the past four games, the longest consecutive stretch this season, as Hershey is a cumulative 5-for-13 (38.46%) in that run. Laval’s penalty-killing unit ranks 32nd in the AHL this season, going 111-for-155 (71.6%).

NOT *THAT* RICHARD:
Despite bearing the same last name as the Rocket’s namesake, Anthony Richard has no relation to legendary Maurice “Rocket” Richard, but the former has nevertheless cut a blazing path in scoring for Laval this season. The forward leads the club and is tied for 11th in league scoring with 37 points (19g, 18a) through 31 games. Richard has been held pointless in only nine games this season; the Rocket have gone 3-4-1-1 in those games.

BEARS BITES:
Hershey goaltender Zach Fucale played for Laval during the 2017-18 season, going 10-7-0 over 18 games...Laval defender Madison Bowey suited up for the Bears between 2015-18…Forward Shane Gersich’s next point will mark his 100th point in a Bears sweater…Forward Mike Vecchione is two points away from 200 in his professional and AHL career…Defender Aaron Ness is two games away from his 700th professional game, and is four points away from his 300th pro point.