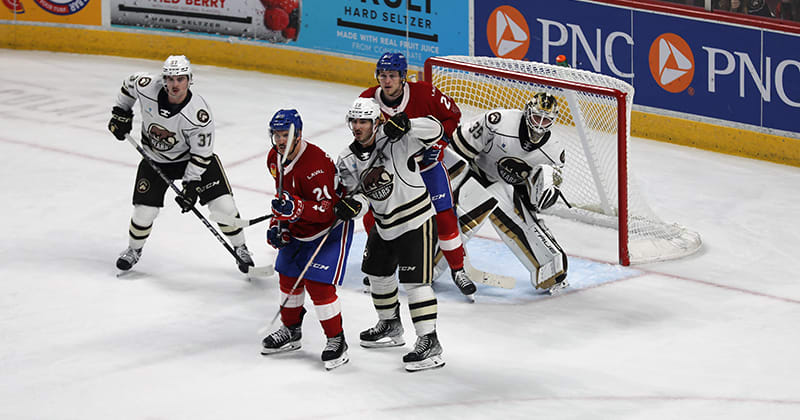 The Hershey Bears continue the 2022-23 season, presented by Penn State Health, as they begin a four-game road trip that opens this weekend north of the border in Canada. Hershey plays the Laval Rocket on Friday, before facing the Belleville Senators on Saturday.

Wednesday, Jan. 11: Hershey 3 vs. Wilkes-Barre/Scranton 4 (OT)
Hershey rallied from a 3-0 deficit in the third period to secure a point, as Mike Sgarbossa ignited the comeback attempt when he scored his 12th of the season with the Bears on the power play at 4:40. Vincent Iorio netted his second of the season at 14:39 and Sgarbossa tied the game at 19:35 with Hunter Shepard pulled for an extra skater. Jonathan Gruden won the game for the Penguins 29 seconds into the overtime period with his second of the evening.

Friday, Jan. 13: Hershey 5 vs. Springfield 3
The Bears out-shot the Thunderbirds 18-4 in the opening period, and Joe Snively opened the scoring at 15:03 with his first of the season. Beck Malenstyn bagged his second of the season at 16:22 and Ethen Frank swatted in a rebound at 18:02. A match penalty to Riley Sutter in the second period led to the Thunderbirds getting a goal from Brady Lyle at 14:59, and another power play in the third period led to a Mathias Laferriere goal at 3:24. With the Bears on a power play of their own, Henrik Borgstrom buried his sixth of the season at 13:38. Will Bitten scored at 14:40 to bring Springfield back to within a pair of goals, but the Bears held the Thunderbirds at bay and Zach Fucale went 19-for-22 to earn his 12th victory of the season.

Saturday, Jan. 14: Hershey 6 vs. Springfield 2
Hendrix Lapierre scored a power-play goal at 3:12 of the first period for his 10th of the season, but Martin Frk then tied the score at 3:34. The Thunderbirds took a 2-1 lead with a power-play goal from Brady Lyle at 14:31. The Bears tied the game at 2-2 at 9:36 of the second period when Connor McMichael snapped a shot past Vadim Zherenko from the left wing. Garrett Pilon scored at 13:41 to put Hershey up 3-2. In the third, Ethen Frank netted his 16th of the season at 4:17. 24 seconds later, Joe Snively put Hershey ahead 5-2, and Pilon added an empty-net tally at 19:53. Hunter Shepard with 21-for-23 to earn his 10th victory of the season.

NELLY HITS 500 CAREER WINS, CLOSING IN ON 13TH IN AHL VICTORIES:
With a 6-2 win over the Springfield Thunderbirds on Saturday, Bears head coach Todd Nelson earned his 500th career win as a head coach. With 334 victories in the American Hockey League under his belt, Nelson needs only seven more victories to pass former Bears bench boss Bruce Boudreau in order to move up to 13th on the AHL’s career wins list.

SNIVELY CONTINUES TO ADD TO STREAK:
With three points (2g, 1a) in each of his of his first three games with Hershey after he was loaned to the Bears by Washington earlier this month, Joe Snively has managed to extend his franchise-record home point streak to 17 games (11g, 13a), dating back to Nov. 14, 2021. Snively is also three points away from his 100th career professional point (41g, 56a).

TERRIFIC TRIO:
Through five games in the month of January, the Bears have been paced by Ethen Frank and Mike Sgarbossa, each with identical six-point (3g, 3a) statlines. The pair have earned all of those points in their last four games, and overall have found great success this season as part of a trio with winger Mike Vecchione. Sgarbossa leads the Bears with nine multi-point games, during which Hershey has posted a record of 7-1-1-0, while Hershey owns a record of 11-0-0-1 in games that Vecchione finds the back of the net.

AND THEN THERE WERE TWO:
With Vincent Iorio missing Saturday’s game due to illness, that leaves only Mason Morelli and Hendrix Lapierre as the only remaining Bears skaters to have dressed for every game this season, with 37. Lapierre is in his first full professional season with the Bears, while Morelli boasts an active ironman streak of 77 regular season games with Hershey dating back to Jan. 25, 2022 vs. Wilkes-Barre/Scranton. The last Bears player to play every game for the club in a single season during a non-shortened campaign was Wayne Simpson and Zach Sill in 2017-18, who played every contest of a 76-game schedule.

ROCKETING UP TO QUEBEC:
This week’s trip to Laval will represent the farthest that the Bears travel during the 2022-23 regular season, at a distance of just over 500 miles from Hershey. The Bears have posted a lifetime record of 5-3-0-0 against Laval, including a 4-1 home victory this season on Nov. 13. Hendrix Lapierre (1g, 1a), Gabriel Carlsson (0g, 2a) and Mason Morelli (0g, 2a) lead Hershey in scoring against Laval this season with two points apiece.

BELLEVILLE BULLIES:
Last season, the Bears went 1-0-1-0 against the Senators, and own a lifetime 5-2-1-0 record against Belleville. Belleville ranks third in the AHL with a home power play of 27.4 percent. The Senators currently rank fourth in the AHL in average penalty minutes per game, at 16.31. Belleville is a perfect 4-0 in the shootout this season, and has scored on nine out of 10 shootout attempts. Belleville is also tied for the fewest first goals this season with 12. The Senators make their lone visit of the regular season to GIANT Center on Feb. 26.

BEARS BITES:
Hershey goaltender Zach Fucale played for Laval during the 2017-18 season, going 10-7-0 over 18 games...Laval defender Madison Bowey suited up for the Bears between 2015-18…Belleville’s Jarid Lukosevicius was a training camp invitee for Hershey during the 2022 preseason…Senators head coach Troy Mann previously served as the Bears’ assistant coach from 2009-13 and as head coach from 2014-18…Belleville goaltending coach Justin Peters tended net for the Bears between 2014-16, and helped the club reach the Calder Cup Finals in 2016…Forward Shane Gersich’s next point will mark his 100th point in a Bears sweater…Forward Mike Vecchione is two points away from 200 in his professional and AHL career…Defender Aaron Ness is two games away from his 700th professional game, and is four points away from his 300th pro point.