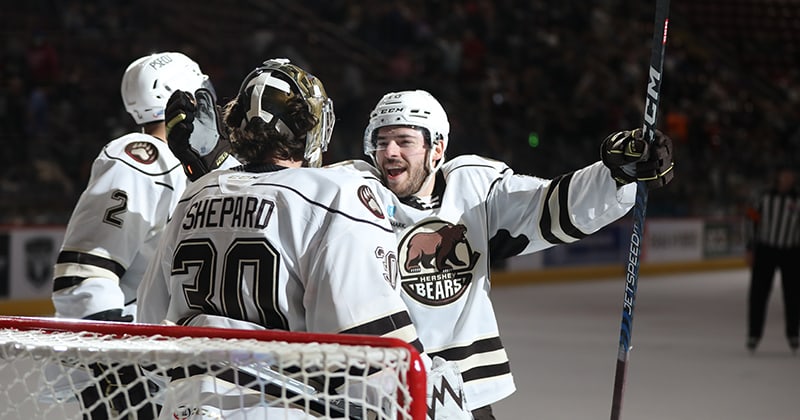 Prior to the game, the Bears honored former forward and alternate captain Chris Bourque with a jersey retirement ceremony; it was the first time the Bears had retired a former player’s number since Ralph Keller was recognized on Dec. 1, 2002. In addition to Bourque’s #17 being raised to the rafters, Bourque and his family were honored with several gifts, including a commemorative hand-painted #17 jersey produced by Mark Kannell Fine Art, depicting Bourque raising the Calder Cup in 2010, and a customized five-pound Hershey’s Milk Chocolate Bar.

The Bears took a 1-0 lead with a power-play goal from Hendrix Lapierre at the 3:12 mark of the first period when the rebound from Henrik Borgstrom’s initial shot was gathered by Mason Morelli in front of the net of Vadim Zherenko, and Morelli’s stuff-in attempt bounced to the left side of the cage, where Lapierre pounced on the loose puck for his 10th of the season.

The lead did not last for long, however, as Martin Frk blasted a shot from the high slot past Hunter Shepard at 3:34 to tie the score at 1-1.

Springfield then took a 2-1 lead with a power-play strike when Brady Lyle one-timed a shot from above the circles past Shepard at 14:31.

With just over a minute remaining in the frame, an equipment issue with the skate of Hunter Shepard forced the netminder from his crease, where he was replaced by Zach Fucale for the final 72 seconds of the first, though the Bears did not face any shots during this time.

Shepard returned to begin the second, and the Bears tied the game at 2-2 at 9:36 when Henrik Borgstrom poked the puck ahead to Connor McMichael following a face-off in the neutral zone. McMichael skated up the left wing before snapping a shot past Zherenko for his eighth of the season.

Garrett Pilon then scored with the man advantage at 13:41 when he picked up a loose puck between the circles and roofed his third of the season past Zherenko, with Borgstrom and Bobby Nardella assisting. For Borgstrom, the assist allowed him to match his previous AHL career-best, which he had originally achieved as a member of the Thunderbirds on Oct. 12, 2018 at Lehigh Valley.

In the third, Ethen Frank continued his scoring ways, as the rookie forward netted his team-leading 16th goal of the season at 4:17 when he deflected a Jake Massie shot from the left point into the cage. Mike Sgarbossa earned a secondary assist.

Pilon sealed the game with an empty-net tally at 19:53 from Lapierre and Aliaksei Protas for his first multi-goal game of the season.

Shots finished 38-23 in favor of Hershey. Shepard went 21-for-23 for Hershey to earn his 10th victory of the season; Zherenko was 32-for-37 for the Thunderbirds. The Bears were 2-for-4 on the power play, scoring twice with the man advantage for only the third time this season; Springfield went 1-for-2 on the power play.

Hershey continues the 2022-23 season, presented by Penn State Health, when the Chocolate and White journey to Canada as they visit the Laval Rocket on Friday, Jan. 20 at 7 p.m. at Place Bell. The Bears return home to GIANT Center for their annual GIANT Teddy Bear Toss when they host the Bridgeport Islanders on Sunday, Jan. 29 at 3 p.m. All fans are encouraged to bring new, stuffed teddy bears and items to the game to toss onto the ice as the Bears score their first goal. All items collected will be donated to local charities. Purchase tickets for the game by CLICKING HERE.