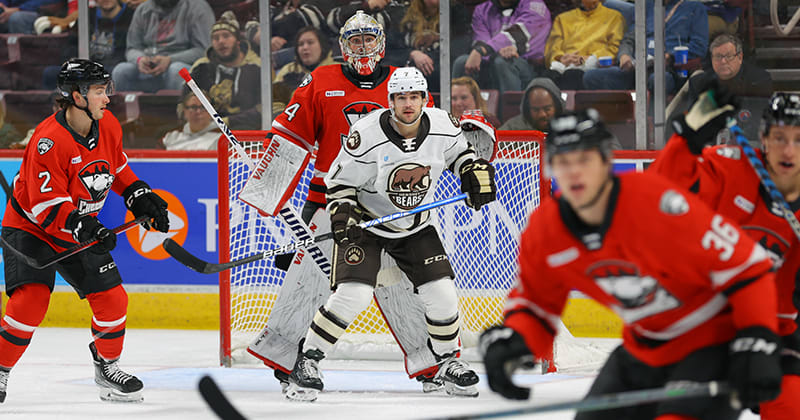 Neither team scored in the opening frame, as Charlotte out-shot Hershey by a slim 8-7 margin. Midway through the stanza, Zach Fucale came up with a post-to-post pad save on Connor Bunnaman to keep the Checkers off the board.

The Bears opened the scoring at 5:32 into the second period when Hendrix Lapierre drove the net and redirected a centering feed from Henrik Rybinski past Alex Lyon for his seventh of the season. Mason Morelli received credit for a secondary assist.

Sam Anas made it 2-0 when he drifted into the left wing corner and floated a backhand shot towards the Charlotte net, and it caromed off of Checkers defender Zach Uens and past the glove of Lyon at 11:39 for Anas’ sixth of the season. Connor McMichael and Vincent Iorio each collected an assist.

The Chocolate and White struck again 18 seconds later when Bobby Nardella’s shot from the left point evaded a maze of bodies and found twine at 11:57 to put Hershey up 3-0 and give the defender his third of the season. Morelli and Rybinski each earned their second assists of the night on the goal. Anas’ and Nardella’s goals combined for the fastest pair of goals scored by the Bears this season.

The Checkers got on the board 18 seconds into the third when Connor Bunnaman found the back of the net on a 2-on-1 shorthanded rush to cut Hershey’s lead to 3-1.
Charlotte scored again at the 7:00 mark during a scramble in front of the Hershey net that saw Riley Nash jam the puck past Fucale to trim the score to 3-2.

The Checkers pulled Lyon with about a minute and a half remaining in regulation, but Mike Vecchione made it 4-2 with an empty-net tally at 19:30 to seal the game with his seventh of the season. Shane Gersich and Mike Sgarbossa picked up assists on the goal.

Shots finished 36-23 favoring Charlotte. Fucale went 34-for-36 for Hershey to pick up his ninth win of the season; Lyon was 19-for-22 for the Checkers. The Bears were 0-for-3 on the power play, while the Checkers went 0-for-3 with the man advantage.

Hershey continues the 2022-23 season, presented by Penn State Health, when the Bears visit the Bridgeport Islanders at Total Mortgage Arena on Friday, Dec. 9 at 7 p.m. The Chocolate and White are back on home ice when the Bears host the Cleveland Monsters for the first time this season at GIANT Center on Saturday, Dec. 10 at 7 p.m. Purchase tickets for the game by CLICKING HERE.