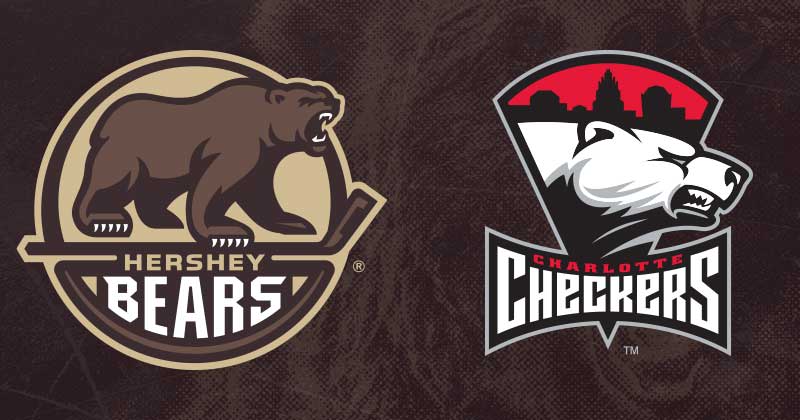 The Hershey Bears continue the 2022-23 season, presented by Penn State Health, as they host the Charlotte Checkers for an Atlantic Division showdown at GIANT Center.

LAST TIME OUT:
The Hershey Bears saw a five-game win streak snapped this past Sunday, falling 7-3 to the Wilkes-Barre/Scranton Penguins at GIANT Center. Hershey grabbed a 3-2 lead after the first period thanks to goals from Sam Anas, Hendrix Lapierre, and Mike Sgarbossa, but in the middle frame, Wilkes-Barre/Scranton rattled off five straight goals in a span of just 7:07 to blitz the Bears. Zach Fucale was lifted in place of Justin Kapelmaster, just signed to a tryout earlier in the day, and the netminder stopped all 10 shots he faced in relief for Hershey. The Checkers scored a 6-4 win in their last outing, upending the Lehigh Valley Phantoms last Saturday. Charlotte went 2-for-5 on the power play, but were just 1-for-4 on the penalty kill.

SAY HEY TO CLAY:
Goaltender Clay Stevenson was re-assigned to the Bears by the Washington Capitals on Monday following Hunter Shepard's recall to the NHL. With South Carolina (ECHL) this season, Stevenson has posted a 5-2-2 record over nine games. The rookie netminder earned his first professional shutout last Saturday for the Stingrays, stopping 25 shots and earning first star honors in a 3-0 victory over Savannah. The native of Drayton Valley, Alberta is unbeaten in regulation in his previous five starts (3-0-2). The 6'4", 195-pound goaltender was signed by the Capitals to a two-year, entry-level contract on Mar. 28 out of Dartmouth College. There, he recorded a record of 6-14-2, with two shutouts, a 2.70 goals-against average, and a .922 save percentage in his sophomore season at Dartmouth. He was named to the ECAC All-Rookie Team and the ECAC Third All-Star Team.

CHECKING IN:
The Charlotte Checkers visit Hershey for the first of four meetings with the Bears this season at GIANT Center. Hershey dropped a pair of road contests at Charlotte earlier this season, squandering a 3-0 lead in a 5-4 loss on Oct. 21, and falling 3-2 in overtime the following night. Charlotte is paced this season by forward Riley Nash, who has scored 19 points (6g, 13a) in 21 games, including tallying two points (1g, 1a) versus Hershey on Oct. 21. The Checkers are without forwards Zac Dalpe, Aleksi Heponiemi, and Chris Tierney who have all been recalled to the NHL's Florida Panthers. Over the previous five seasons, Hershey has posted a cumulative 9-5-0-0 record at GIANT Center against Charlotte. Hershey went 2-2-0-0 versus the Checkers on home ice last year.

MIKE AND MIKE:
Hershey forward Mike Sgarbossa is starting to find success on the scoresheet. The veteran center has four points (2g, 2a) over the past two games, and has now collected 11 points (5g, 6a) in 16 games this season. He did not travel to Charlotte earlier this season as he awaited the birth of his son, but last year he enjoyed great success versus the Checkers, scoring eight points (4g, 4a) in just five head-to-head games. His linemate Mike Vecchione has three assists versus the Checkers so far this season, and is fresh off tallying his 100th career AHL/professional assist in Sunday's loss to Wilkes-Barre/Scranton.

BEARS BITES:
Hershey forward Hendrix Lapierre ranks 10th in the AHL in rookie scoring with 15 points (6g, 9a)...Hershey's Sam Anas was the best man in Charlotte forward Gerry Mayhew's wedding this past summer. The two were teammates previously with the Iowa Wild...Checkers forward Patrick Giles, a native of Chevy Chase, Maryland, played for the Hershey Jr. Bears Quebec team in 2012-13...Sunday's 7-3 loss for Hershey to Wilkes-Barre/Scranton was uncharacteristic for the Bears on home ice. The last time the Bears allowed seven or more goals at home was a 7-6 shootout loss to Providence on Nov. 27, 2019. The last time Hershey allowed seven or more goals through regulation at GIANT Center was a 8-7 loss to Rochester on Oct. 20, 2012.