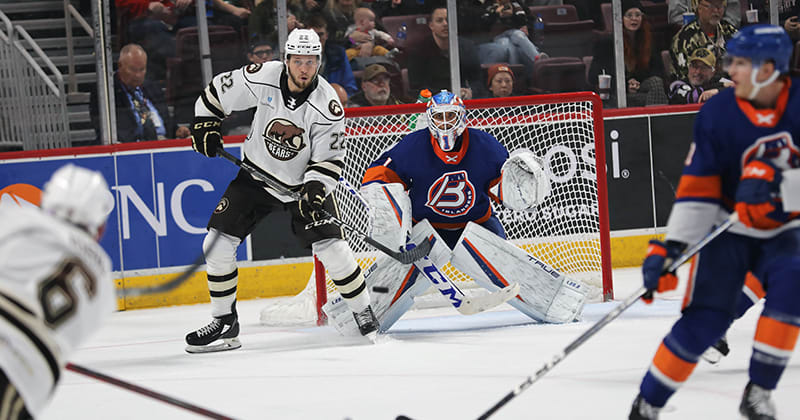 The Hershey Bears continue the 2022-23 season, presented by Penn State Health, when they host the Charlotte Checkers on Tuesday at GIANT Center before heading out on the road for a visit to Bridgeport against the Islanders on Friday. The Bears then return home for a pair of games against the Cleveland Monsters on Saturday and Sunday.

Tuesday, Nov. 29: Hershey 4 vs. Wilkes-Barre/Scranton 3 (SO)
Hershey initially fell behind after surrendering the first goal of the game just 69 seconds into the contest when Drake Caggiula scored for the Penguins, then Valtteri Puustinen deflected a shot at 7:50 to put the visitors up 2-0. Mason Morelli then got Hershey on the board at 15:41 when he redirected a shot from Jake Massie, and Massie scored his first of the season at 6:52 of the second to draw the Bears even at 2-2. The Bears surrendered a power-play goal to Nathan Legare 1:33 into the third, but Mike Vecchione equalized with his sixth of the season at 11:04. After regulation and overtime yielded no decision, Sam Anas beat Dustin Tokarski in the second round of the shootout and Hunter Shepard stopped Caggiula in the top of the third round to secure the win for Hershey. Shepard finished the contest with 16 saves for the Bears.

Wednesday, Nov. 30: Hershey 4 at Lehigh Valley 2
Hendrix Lapierre gave the Bears a 1-0 lead 16:57 into the first period for his fifth of the season, but Olle Lycksell tied it for the Phantoms 9:19 into the second frame. The Bears went up 2-1 thanks to a power-play goal by Connor McMichael at 12:43 for his second of the season, only for Lehigh Valley to tie the score at 2-2 when Garrett Wilson struck at 18:45. Hershey pulled ahead for good at 3:28 of the third when Dylan McIlrath’s shot struck the crossbar and then Mike Sgarbossa, who finished the evening with three points (1g, 2a). Ethen Frank added an empty-net tally with one minute remaining, and Zach Fucale made 18 saves for the win. The victory, coupled with a 4-3 loss by Providence at Bridgeport, moved the Bears into first place in the Atlantic Division and AHL.

Sunday, Dec. 4: Hershey 3 vs. Wilkes-Barre/Scranton 7
The Bears had three separate leads during the first period thanks to goals from Sam Anas (1:19), Hendrix Lapierre (12:05) and Mike Sgarbossa (17:25), but each time the Penguins had an answer. Valtteri Puustinen’s power-play goal 42 seconds into the middle frame leveled the game at 3-3, and Wilkes-Barre/Scranton added four additional goals in the following 7:07 to deal the Bears their most significant loss on home ice this season. Zach Fucale was replaced with Justin Kapelmaster following the seventh goal, and Kapelmaster went on to make 10 saves in relief.

CHECKING IN ON THE CHECKERS:
Hershey dropped the first two meetings with Charlotte after going 0-1-1-0 at Bojangles Coliseum in late October. This week’s home clash with the Checkers will be the first of four total home games against Charlotte during the 2022-23 campaign, after going 2-2-0-0 on home ice last season. Over the previous five seasons, Hershey has posted a cumulative 9-5-0-0 record at GIANT Center against Charlotte. Checkers forward Patrick Giles, a native of Chevy Chase, Maryland, previously played for the Hershey Jr. Bears’ Quebec City team in 2012-13.

BEARS AT ISLANDERS:
The Bears enter the week tied with Bridgeport for second in the AHL standings with 30 points through 21 games. Hershey is 2-0-0-0 against the Islanders this season after winning a pair of back-to-back overtime games against Bridgeport at home in mid-November. Friday’s contest will be Hershey’s first of three visits to Bridgeport this season. In the previous five seasons, the Chocolate and White have posted a 7-5-0-0 record at Total Mortgage Arena. The Bears are led in scoring against the Islanders this season by Ethen Frank and Shane Gerisch, each of whom have logged one goal and two assists through two games. Bridgeport is coached by former Bears captain Brent Thompson, while Bears defender Aaron Ness previously captained the Islanders during their days as the Bridgeport Sound Tigers. The Islanders are 10-0-0-0 when leading after two periods of play this season, tied with Toronto (10-0-1-0) for the most wins in the Eastern Conference.

AAAHH!!! REAL MONSTERS:
The Monsters are in their first season with Trent Volgelhuber at the helm of the Monsters, who took over for Mike Eaves (former Bears coach from 1990-93) this past summer. Assistant coach Mike Haviland previously served as Hershey’s head coach during the 2013-14 season. Cleveland’s Trey Fix-Wolansky enters the week riding a four-game goal-scoring streak, in which he has found the back of the net seven times dating back to Nov. 11; all four of his games have been on the road for the Monsters. Fix-Wolansky and teammate Samuel Knazko are one of five AHL players to record a five-point game this season; both achieved the feat on Nov. 18 in a 7-3 romp at Laval.

GOALTENDING CHANGE:
Earlier this afternoon, the Bears had a pair of changes made to their goaltending corps, as Hunter Shepard was recalled to the Washington Capitals, while Caps netminding prospect Clay Stevenson was reassigned to Hershey from South Carolina of the ECHL. Shepard was recently named AHL Goaltender of the Month for November after going 6-0-0 with a 1.63 goals-against average and a .936 save percentage in six games. Stevenson, meanwhile, has gone 5-2-2 with the Stingrays over nine games and earned his first professional shutout on Saturday.