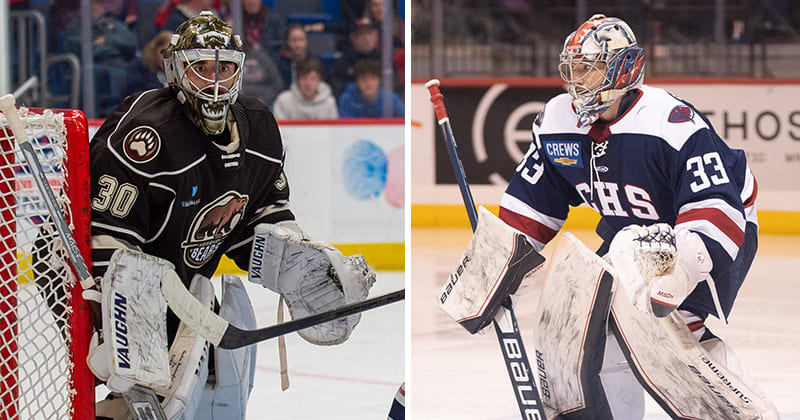 The Washington Capitals, the NHL affiliate of the Hershey Bears, announced today that they have recalled goaltender Hunter Shepard from Hershey. Additionally, the club announced that goaltender Clay Stevenson has been re-assigned from the South Carolina Stingrays (ECHL) to the Bears.

Shepard, 27, has a record of 6-0-2 this season for the Bears and ranks first in the AHL with a 1.83 goals-against average and a .932 save percentage. He was named the AHL's Goaltender of the Month for November, recording a perfect 6-0-0 record in six starts during the month, posting a 1.63 goals-against average and a .936 save percentage for the Chocolate and White. He was the first Bears netminder to earn this honor since future NHL All-Star Braden Holtby was named the AHL Goalie of the Month nearly 10 years ago in December 2012.

The native of Cohasset, Minn., is 14-3-2 in 20 games with Hershey over three pro seasons, with a 1.80 goals-against average, a .934 save percentage and three shutouts. Shepard played four seasons at the University of Minnesota-Duluth, winning national championships in 2018 and 2019. If he appears in a game with the Capitals, it would mark his NHL debut.

Stevenson, 23, has posted a 5-2-2 record with the Stingrays this season over nine games. The rookie netminder earned his first professional shutout last Saturday for the Stingrays, stopping 25 shots and earning first star honors in a 3-0 victory over Savannah. The native of Drayton Valley, Alberta is unbeaten in regulation in his previous five starts (3-0-2).

The 6'4", 195-pound goaltender was signed by the Capitals to a two-year, entry-level contract on Mar. 28 out of Dartmouth College. There, he recorded a record of 6-14-2, with two shutouts, a 2.70 goals-against average, and a .922 save percentage in his sophomore season at Dartmouth. He was named to the ECAC (Eastern College Athletic Conference) All-Rookie Team and the ECAC Third All-Star Team.

Hershey continues the 2022-23 season, presented by Penn State Health, when the Bears host the Charlotte Checkers for the first time this season at GIANT Center for Pepsi Zero Sugar Reusable Straw Keychain Night (featuring a reusable straw keychain for the first 6,000 fans in attendance, courtesy of Pepsi Zero Sugar) and TRULY Takeover Tuesday (featuring $16 TRULY and empanada specials, along with samplings, giveaways and a chance to win TRULY-branded hockey gear) on Tuesday, Dec. 6 at 7 p.m. Purchase tickets for the game by CLICKING HERE.