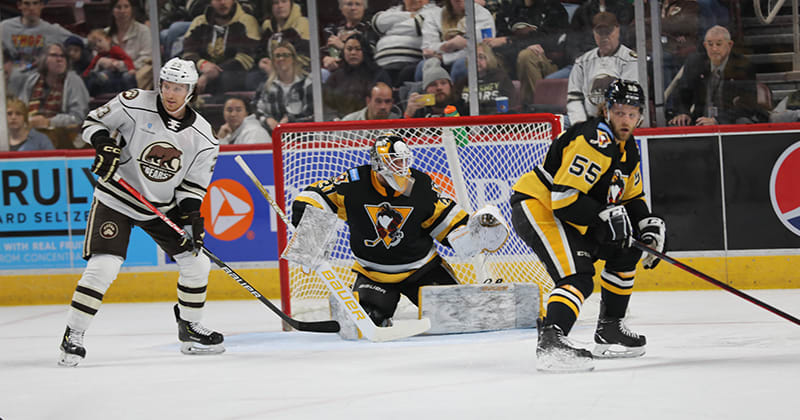 The Hershey Bears (14-5-2-0) saw their five-game win streak come to an end following a 7-3 defeat to the Wilkes-Barre/Scranton Penguins (11-6-1-2) on Sunday evening at GIANT Center, as the Bears allowed goals from seven different scorers.

Sam Anas opened the scoring for Hershey just 1:19 into the game, when he darted into the offensive zone with Connor McMichael on a give-and-go and beat Filip Lindberg with a backhand shot to the glove side for his fifth of the season to put the Bears up 1-0. McMichael and Henrik Borgstrom earned assists on the goal.

Filip Hallander netted the equalizer at 1-1 for the Penguins at 10:02 when he grabbed a rebound off the pads of Zach Fucale and stuffed the puck into the net.

Minutes later, Hendrix Lapierre netted a power-play goal to put the Chocolate and White ahead 2-1. The rookie scored his sixth of the season during a 5-on-3 man advantage after gathering the puck back in the defensive end, hustling up the ice and wiring a wrist shot past the blocker of Lindberg at 12:05 for his sixth of the season, tying Lapierre with Ethen Frank and Mike Vecchione for the team goal-scoring lead.

The Penguins then drew level again at 16:16 when Alexander Nylander collected a power-play goal, making it 2-2.

Mike Sgarbossa put the Bears up 3-2 with his fifth of the season at 17:25 when he and Vecchione grabbed the loose puck along the half-boards, and Sgarbossa fired a shot above the glove of Lindberg into the top-right corner. For Vecchione, the helper was the 100th of his professional career.

The Penguins seized control in the second period, as Valtteri Puustinen scored a power-play goal 42 seconds into the second frame to tie the score at 3-3. Puustinen’s strike ignited a five-goal run for Wilkes-Barre/Scranton, as Mitch Reinke netted a goal at 1:34 to put the visitors ahead 4-3, Drew O’Connor tallied at 2:07, Jonathan Gruden found the net at 3:36 and Tyler Sikura capped the scoring binge at 7:49, giving Wilkes-Barre/Scranton a run of five goals in a span of 7:07. O’Connor led the way for the Penguins with a four-point (1g, 3a) outing.

Sikura’s goal prompted Hershey to replace Fucale in net with Justin Kapelmaster, who made his Bears debut after signing a professional tryout agreement with the Bears earlier in the day. Kapelmaster went 10-for-10 in relief of Fucale, as Sikura’s tally was the final goal of the day.

Shots finished 31-24 favoring Wilkes-Barre/Scranton. Fucale went 14-for-21 for Hershey in the loss; Lindberg was 21-for-24 for the Penguins. The Bears were 1-for-5 on the power play, while the Penguins went 2-for-2 with the man advantage.

Hershey continues the 2022-23 season, presented by Penn State Health, when the Bears host the Charlotte Checkers for the first time this season at GIANT Center for Pepsi Zero Sugar Reusable Straw Keychain Night (featuring a reusable straw keychain for the first 6,000 fans in attendance, courtesy of Pepsi Zero Sugar) and TRULY Takeover Tuesday (featuring $16 TRULY and empanada specials, along with samplings, giveaways and a chance to win TRULY-branded hockey gear) on Tuesday, Dec. 6 at 7 p.m. Purchase tickets for the game by CLICKING HERE.