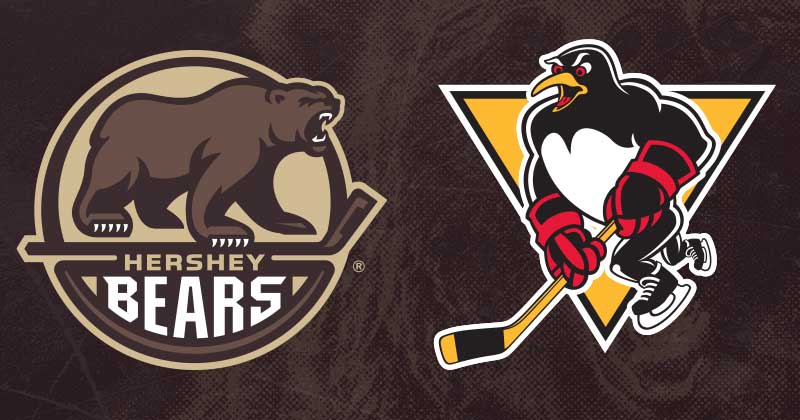 The Hershey Bears continue the 2022-23 season, presented by Penn State Health, as they return home to face the Wilkes-Barre/Scranton Penguins for the second time this week after picking up a 4-3 shootout victory at GIANT Center against their I-81 rivals on Tuesday. Following a 4-2 win at Lehigh Valley on Wednesday, the Bears are riding a five-game win streak and are just one point behind AHL-leading Providence.

Tonight’s Promotions:
David A. Smith Printing Team Photo Night – The first 6,000 fans in attendance will receive a copy of the 2022-23 Hershey Bears team photo
Team Autograph Night – All fans in attendance are invited onto the ice following the game to get autographs and photographs with the Bears players and coaching staff
BUY TICKETS NOW

LAST TIME OUT:
Mike Sgarbossa led the way for the Bears with a three-point (1g, 2a) effort as the Bears visited the Lehigh Valley Phantoms on Wednesday, earning a 4-2 win. The Bears took a 1-0 lead at 16:57 of the first period when Hendrix Lapierre tapped in a back-door feed from Henrik Rybinski for his fifth of the season. Olle Lycksell tied the score for the Phantoms midway through the second period, but Connor McMichael netted a power-play goal at 12:43 to put Hershey ahead 2-1 with his second goal of the season. Garrett Wilson equalized for the Phantoms at 18:45, but in the third period Sgarbossa netted the eventual game-winner when Dylan McIlrath’s shot struck the crossbar and then the forward before entering the net at 3:28 for Sgarbossa’s fourth of the season, and Ethen Frank added an empty-netter with one minute remaining for his sixth of the season. The Penguins were in action last night, falling 5-1 to Bridgeport on home ice. Nathan Legare had the lone goal for Wilkes-Barre/Scranton in the loss.

BEARS-PENGUINS:
Today’s game will mark the sixth of 12 total contests this season between the Bears and Penguins. Hershey leads the regular season series with seven points on the strength of three wins and an overtime point. Ethen Frank (2g, 1a), Vincent Iorio (0g, 3a) and Hendrix Lapierre (0g, 3a) lead the Bears in scoring against the Penguins, while Filip Hallander (4g, 1a) and Valtteri Puustinen (1g, 4a) lead Wilkes-Barre/Scranton against the Chocolate and White.

A NOVEMBER TO REMEMBER:
History was made last month, as the Bears went an astounding 11-2-0-0 in November, establishing a new franchise mark for the most wins in the month of November. Hershey’s previous record for most wins in November was nine, which had most recently occurred in the 2007-08 season (9-4-0-0). Hendrix Lapierre led the way for the Bears in November with 10 points (4g, 6a) in 13 games, while his four goals tied Ethen Frank and Mason Morelli for the team goal-scoring lead. Bobby Nardella and Vincent Iorio tied for the defensive scoring lead with six points apiece, each with a goal and five assists, while Iorio and Gabriel Carlsson led the team in plus-minus at +8. And of course, the goaltending duo of Zach Fucale and Hunter Shepard was tremendous, with Shepard garnering AHL Goaltender of the Month honors with a 6-0-0 record along with a 1.63 goals-against average and a .936 save percentage.

HEALING UP:
It is anticipated that the Bears could see the possible return to the lineup of a handful of players who have missed recent game action. Defenseman Gabriel Carlsson has missed the last three games, while defender Lucas Johansen has been out of the last seven contests. Additionally, forward Shane Gersich has missed the previous five matches; prior to sustaining an upper body injury on Nov. 20 vs. Hartford, Gersich had enjoyed a stretch of seven points (2g, 5a) over seven games.