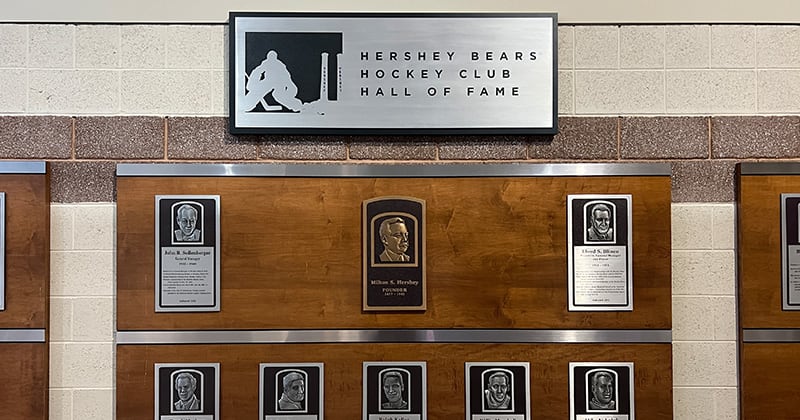 The Hershey Bears Hockey Club Hall of Fame Committee has announced the individuals that will be inducted at the club's Hall of Fame Night, set for Mar. 18, 2023.

The Hershey Bears Hockey Club Hall of Fame Class of 2021:

Barry Ashbee
Barry Ashbee was a mainstay on Hershey’s blue line for seven seasons, helping the team to a Calder Cup title in 1968-69. That season, he notched a career-best 34 points (5g, 29a) to go along with 130 penalty minutes. He was co-captain of the Bears during the 1962-63 season. He went on to play four seasons in the NHL with Flyers, winning the Stanley Cup in 1974. The club named an award for dedication to hockey after Ashbee that was presented from 1987-95 during the affiliation with the Flyers.

Frederic Cassivi
Frederic Cassivi played six seasons with the Bears, and he ranks fifth all-time in games played among goaltenders with 246, as well as in wins with 113. His 56 playoff games are the most by any Bears goaltender. In 2005-06, he led the AHL in wins (34), and helped Hershey to the 2006 Calder Cup title, winning 16 games in the playoffs, and claiming the Jack A. Butterfield Trophy as playoff MVP. He also helped Hershey to the 2007 Calder Cup Finals, and from May 17, 2006 - May 19, 2008, he started 42 straight playoff games for the Bears, a club record. He was inducted into the AHL Hall of Fame in 2015.

John Henderson
John Henderson, known as "Long John", was a team leader and earned the club a 1969 Calder Cup title, recording one of his two playoff shutouts in the game that clinched the championship. He went 8-3 with a 2.91 goals against average in that playoffs, after a strong 23-14-3 regular season with a 2.90 goals against average in 41 games. His 152 games played with Hershey ranks 10th in franchise history.  He also played 46 NHL games with the Boston Bruins.

John Travers
John Travers covered the Hershey Bears for The Patriot, The Evening News, and The Sunday Patriot-News for over three decades, starting in 1950. He was named the executive sports editor in 1976. He won 16 Pennsylvania Newspapers Publisher's Association writing awards. He was named the winner of the AHL’s prestigious James Ellery Award in the 1968-69 season. The club’s annual plus-minus award is named after Travers, and fellow sports writer and Hershey Bears Hockey Club Hall of Fame member Steve Summers. Additionally, the John Travers Award award is given to the top student athletes in the Central PA area each year.

The Hershey Bears Hockey Club Hall of Fame Class of 2022:

Keith Aucoin
Keith Aucoin was one of the most decorated players ever to skate in the American Hockey League. He played four seasons with the Bears, helping the club to back-to-back Calder Cup titles in 2009 and 2010. He was the AHL’s MVP and scoring champion in the 2009-10 season after tallying 106 points (35g, 71a) in 72 games with the Bears. That campaign helped him become one of just 12 Bears to tally a 100+ point season in club history. In his four seasons with the Bears, he led Hershey in assists three times and points twice. He was a three-time All-Star with the Bears, and also earned First Team AHL All-Star honors three times, and Second Team AHL All-Star honors once. He served as an alternate captain for all four of his seasons with the Chocolate and White and was inducted into the AHL Hall of Fame in 2022. His 255 assists with the Bears rank him 10th in franchise history.

Don Foreman
Don Foreman was a longtime, well-respected linesman in the American Hockey League who was familiar to fans at Hersheypark Arena. He worked exclusively Hershey Bears home games from 1960-70, before traveling through the AHL working 80 games per year. He worked numerous Calder Cup Finals, and was the top rated linesman in the AHL when he hit his mandatory retirement age in 1983. He also had experience as a referee in the North American Hockey League from 1971-76 and in the NHL during the 1978-79 season. The Oberlin, Penn. native was elected to Central Chapter Pennsylvania Sports Hall of Fame in 2018.

Gregg Mace
A staple in the Central Pennsylvania community, Gregg Mace was an institution at Hersheypark Arena and GIANT Center, reporting on the Hershey Bears for over 40 years. Mace was abc27’s first weekend sportscaster, starting with the station in 1979, allowing him to cover all six of Hershey’s championships since 1980. Over the years, he worked in partnership with the Bears to broadcast games on abc27, serving as a color commentator for the telecasts. For his dedication and coverage of the Bears, Mace was the recipient of the American Hockey League’s 2005-06 James H. Ellery Memorial Award, earning recognition for outstanding media coverage in the television category. In 2019, Mace was inducted into the Silver Circle Society by the National Academy of Television Arts & Sciences Mid-Atlantic Chapter.