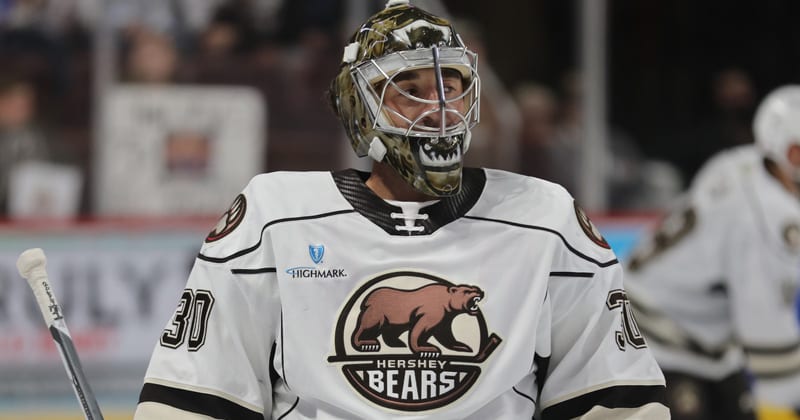 The American Hockey League announced today that Hunter Shepard of the Hershey Bears has been named the AHL Goalie of the Month for November.

Shepard, 27, recorded a perfect 6-0-0 record in six starts during the month, posting a 1.63 goals-against average and a .936 save percentage for the Chocolate and White. He stopped 147-of-157 shots, and his strong play has helped the Bears climb to top of the AHL standings.

Shepard opened November with a 30-save performance in a 4-3 win over Wilkes-Barre/Scranton on Nov. 6. He then allowed only one goal in each of his next four starts, including 2-1 victories over Bridgeport (27 saves) on Nov. 12, at Springfield (26 saves) on Nov. 23, and at Hartford (30 saves) on Nov. 25. In the Nov. 23 game, he made a diving glove save that earned him the #2 play on ESPN Sportscenter Top 10. Shepard finished the month leading Hershey to a 4-3 shootout win over the Penguins on Nov. 29.

In eight appearances with the Bears this season, Shepard has a record of 6-0-2 and ranks second in the AHL with a 1.83 goals-against average and third with a .932 save percentage. The native of Cohasset, Minn., is 14-3-2 in 20 games with Hershey over three pro seasons, with a 1.80 goals-against average, a .934 save percentage and three shutouts. Shepard played four seasons at the University of Minnesota-Duluth, winning national championships in 2018 and 2019.

Hershey continues the 2022-23 season, presented by Penn State Health, when the Bears return to GIANT Center for David A. Smith Printing Team Photo Night (featuring a copy of the team photo for the first 6,000 fans in attendance) and Team Autograph Night, against the Wilkes-Barre/Scranton Penguins on Sunday, Dec. 4 at 3 p.m. Purchase tickets for the game by CLICKING HERE.