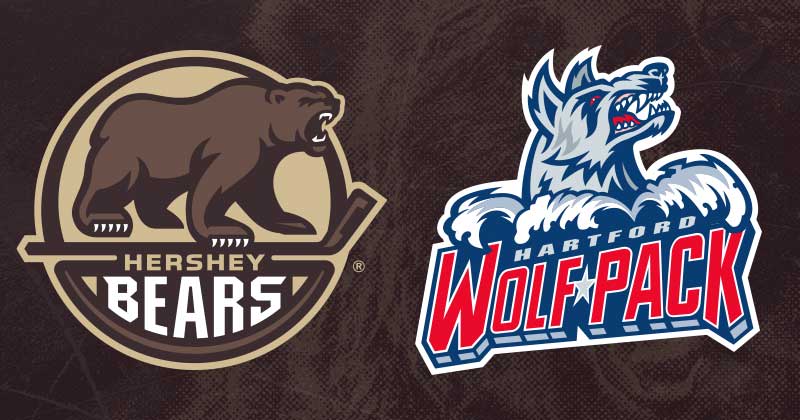 The Hershey Bears continue the 2022-23 season, presented by Penn State Health, as they look for a third straight win on the road as they visit the Hartford Wolf Pack at XL Center for the second straight night.

LAST TIME OUT:
The Hershey Bears earned a second straight road win last night, defeating the Hartford Wolf Pack by a score of 2-1 at XL Center. The Bears scored both of their goals in the opening period, with Mike Vecchione finding the back of the net for his fifth goal of the season just 34 seconds into the game. Later in the period, Henrik Borgstrom also scored his fifth goal of the year, cashing in on the power play off a cross-ice feed from Hendix Lapierre at 18:04 to make it 2-0. Hunter Shepard kept the Wolf Pack at bay through 40 minutes, and only Tim Gettinger's shot at 4:07 of the third period beat him. Shepard earned his fifth straight win, stopping 30 shots, and lowering his goals-against average to a league-best 1.69. The Bears held the Wolf Pack to 0-for-3 on the power play and went 1-for-4 on the man-advantage.

QUIETING THE COMPETITION:
With another 2-1 victory last night, Hershey continues to stymie its opponents. In Hershey's previous five victories, the Bears have allowed just one goal in each of those games. Through 17 games this season, the Bears have surrendered just 37 goals, the lowest total in the league, narrowly edging Wilkes-Barre/Scranton (16 games) and Ontario (15 games) who have allowed just 38 goals. Hershey is allowing only 2.18 goals per game, the best mark in the league.

STREAKING ON THE ROAD:
With a win tonight, Hershey can secure its first three-game road winning streak since Dec. 11-17, 2021. In that stretch, the Bears earned a 3-2 overtime win at Wilkes-Barre/Scranton on Dec. 11, topped the Penguins on the road again by a 4-1 score on Dec. 14, then scored a 2-0 shutout at Springfield on Dec. 17. The Bears enter tonight's game with a .500 record on the road, going 3-3-1-0 away from GIANT Center this season.

MAC'S HELPING HAND:
Hershey captain Dylan McIlrath earned an assist last night on Mike Vecchione's first period tally. For the Hershey blue liner, it was his third helper of the season in just 16 games, moving him halfway to his total of six assists last season, accomplished over 74 games. All three of McIlrath's assists this season have come versus the Wolf Pack, the team he started his AHL career with.

BEARS BITES:
The Bears are now 5-0-0-0 when Mike Vecchione scores a goal...Hershey is 8-1-1-0 when they score on the power play this season...When the Bears do not surrender a first period goal, they hold a 9-1-0-0 record this year....With his goal last night, Henrik Borgstrom extended his point streak to four games (3g, 2a), the longest stretch of his AHL career.