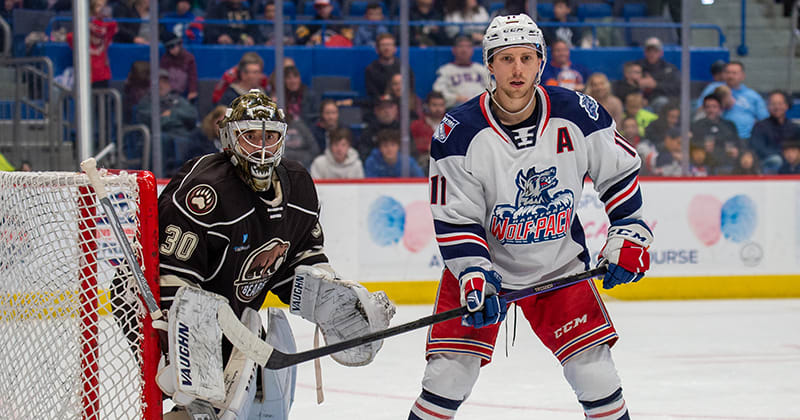 Mike Vecchione and Henrik Borgstrom scored, and Hunter Shepard made 30 saves as the Hershey Bears (11-4-2-0) picked up their second consecutive road victory with a 2-1 win over the Hartford Wolf Pack (5-7-1-3) on Friday night at the XL Center.

The win marked the first time this season that the Bears had won back-to-back road games after picking up a 2-1 win at Springfield on Nov. 23. It was also Hershey’s first triumph at Hartford since March 7, 2020 (4-1 W).

Vecchione scored 34 seconds into the contest to give the Bears a 1-0 lead when he found a Dylan McIlrath rebound from the point and put it behind Louis Domingue for his fifth of the season. Mike Sgarbossa picked up the secondary assist on the tally.

Later in the frame, with the Chocolate and White on the power play, Hendrix Lapierre and Mason Morelli entered the offensive zone on a give-and-go, before Lapierre passed the puck over to the right circle, where Borgstrom one-timed it past Domingue at 18:04 for his fifth of the season, putting Hershey ahead 2-0.

Tim Gettinger got the Wolf Pack on the board with an unassisted goal at 4:07 of the third period, halving Hershey’s lead to 2-1.

Shots finished 31-28 favoring Hartford. Shepard went 30-for-31 for Hershey, while Domingue was 26-for-28. The Bears were 1-for-4 on the power play, while the Wolf Pack were 0-for-3 with the man advantage.

Hershey continues the 2022-23 season, presented by Penn State Health, when the Bears conclude their road trip against the Hartford Wolf Pack at the XL Center on Saturday, Nov. 26 at 7 p.m. The Bears are back at GIANT Center for Truly Tuesday, featuring $16 Truly and empanadas at the Truly Cart, against the Wilkes-Barre/Scranton Penguins on Tuesday, Nov. 29 at 7 p.m. Purchase tickets for the game by CLICKING HERE.