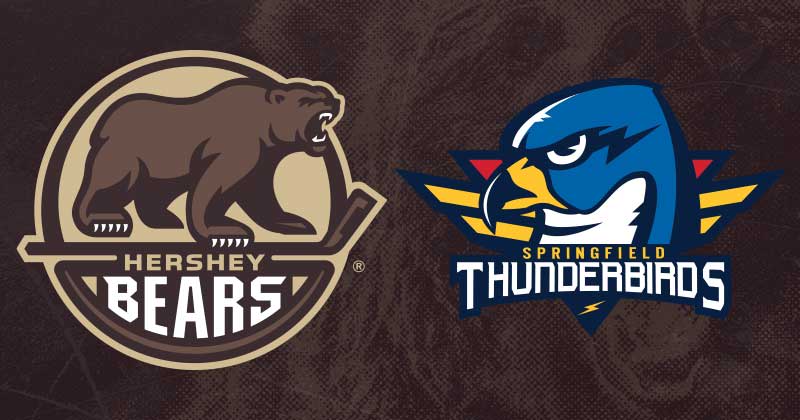 The Hershey Bears continue the 2022-23 season, presented by Penn State Health, as they open up a three-game road trip tonight, taking on the Springfield Thunderbirds for the first time in the campaign.

LAST TIME OUT:
Hershey completed a three-in-three weekend with their second meeting with the Hartford Wolf Pack on Sunday, Nov. 20. Andy Welinski scored on Hartford’s first shot of the game at 3:49 to put the Bears in a 1-0 hole. Midway through the first period, Dylan McIlrath and Matt Rempe scrapped, and on the ensuing shift, Julian Napravnik beat Louis Domingue at 10:05 to tie the game. Hershey then grabbed a 2-1 lead when Henrik Borgstrom buried a Henrik Rybinski feed at 16:53. Hartford knotted the score at 2-2 with a shorthanded goal from Ben Harpur 51 seconds into the second, and Ty Emberson put Hartford ahead for good at 5:58. Will Cuylle added an empty-net tally at 18:12 of the third period to cap the scoring at 4-2. That same day, the Thunderbirds’ power play exploded at home against Lehigh Valley, as Springfield’s man advantage unit went 4-for-6 against the Phantoms. After initially trailing 2-1 at the end of the first period, the Thunderbirds managed to take a 3-3 tie into the locker room for the start of the third period. Anthony Angello, who had already scored in the middle frame, tacked on two more goals at 8:46 and 12:39 of the third to complete a hat-trick performance, and Greg Printz added a goal at 19:03 to give Springfield a 6-4 victory, while Vadim Zherenko made 37 saves.

BEARS AND THUNDERBIRDS AT-A-GLANCE:
Hershey is slated to play Springfield a total of four times during the 2022-23 campaign. The Bears will host the Thunderbirds in a pair of games in mid-January, before returning to the MassMutual Center in early April for the penultimate road game of Hershey’s regular season schedule. In the previous five seasons, the Chocolate and White have posted a record of 14-6-3-1 against the current St. Louis Blues affiliate. Last season, in Springfield’s first year of its partnership with the Blues, the Bears posted a record of 4-0-2-0 against the T-Birds. Garrett Pilon led the way in team scoring against Springfield, with seven points (1g, 6a) in six games. He and Shane Gerisch also recorded a +7 to lead the team in plus-minus.

FAMILIAR FACES:
Current Bears player Sam Anas was a member of Springfield’s roster last season, recording four points (2g, 2a) in six regular season games against Hershey, and eventually helped the club capture the Eastern Conference crown in the Calder Cup Playoffs. In addition to Anas, Hershey’s roster also contains several additional former Springfield players: defenseman Jake Massie suited up in 29 games for Springfield in his first season of professional hockey in 2019-20, Mike Sgarbossa played 14 games for the T-Birds in their inaugural campaign in 2016-17, while Henrik Borgstrom suited up between 2018-20 as a prospect within the Florida Panthers’ system. Meanwhile, Springfield general manager Kevin Maxwell played the final two seasons of his pro career with Hershey between 1986-88, helping the Bears claim the Calder Cup in the 1987-88 campaign.