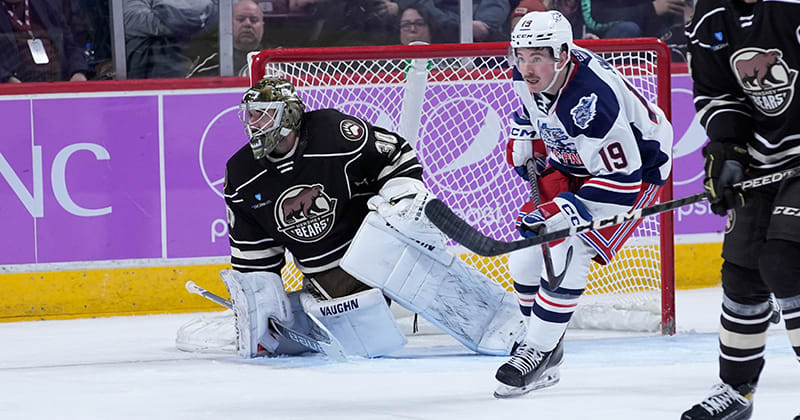 The Hershey Bears continue the 2022-23 season, presented by Penn State Health, with a three-game road trip. The Chocolate and White visit the Springfield Thunderbirds on Wednesday before visiting the Hartford Wolf Pack for a pair of games on Friday and Saturday.

Friday, Nov. 18: Hershey 0 at Wilkes-Barre/Scranton 4
The Bears suffered their first shutout loss of the season as Wilkes-Barre/Scranton goaltender Dustin Tokarski turned in a 26-save performance to blank Hershey. Drake Caggiula scored the eventual game-winning goal for the Penguins at the 4:16 mark of the first period. A potential tying score from Vincent Iorio at 15:41 of the second period was waved off for contact with the goaltender by another Bears player. The Penguins added goals from Jonathan Gruden, Sam Houde and an empty-net tally from Filip Hallander in the third.

Saturday, Nov. 19: Hershey 6 vs. Hartford 1
The Bears enjoyed their largest offensive output of the season, as the line of Mason Morelli (9:50), Henrik Borgstrom (16:50) and Garrett Pilon (19:58) each contributed a goal and an assist in the opening frame to chase Hartford netminder Louis Domingue. In the second period, Sam Anas deflected Vincent Iorio’s point shot past Dylan Garand at 5:50 for his 100th career goal, making it 4-0. Mike Vecchione netted a power-play goal at 9:10 to extend the lead to five goals. Andy Welinski broke Hunter Shepard’s bid for a shutout at 16:23, and Pilon exited the game with a lower body injury late in the second, before Hendrix Lapierre scored at 19:46 to cap the scoring. Shepard made 18 saves in the victory as Hershey extended its run at home to 8-0-1-0.

Sunday, Nov. 20: Hershey 2 vs. Hartford 4
Andy Welinski scored on Hartford’s first shot of the game at 3:49 to put the Bears in a 1-0 hole. Midway through the first period, Dylan McIlrath and Matt Rempe scrapped, and on the ensuing shift, Julian Napravnik beat Louis Domingue at 10:05 to tie the game. Hershey then grabbed a 2-1 lead when Henrik Borgstrom buried a Henrik Rybinski feed at 16:53. Hartford knotted the score at 2-2 with a shorthanded goal from Ben Harpur 51 seconds into the second, and Ty Emberson put Hartford ahead for good at 5:58. Will Cuylle added an empty-net tally at 18:12 of the third period to cap the scoring at 4-2.

TAKING ON THE T-BIRDS:
Hershey is slated to play Springfield a total of four times during the 2022-23 campaign. The Bears will host the Thunderbirds in a pair of games in mid-January, before returning to the MassMutual Center in early April at the penultimate road game of Hershey’s regular season schedule. In the previous five seasons, the Chocolate and White have posted a record of 14-6-3-1 against the current St. Louis Blues affiliate. Last season, in Springfield’s first year of its partnership with the Blues, the Bears posted a record of 4-0-2-0 against the T-Birds. Garrett Pilon led the way in team scoring against Springfield, with seven points (1g, 6a) in six games. He and Shane Gerisch also recorded a +7 to lead the team in plus-minus. Current Bears player Sam Anas was a member of Springfield’s roster last season, recording four points (2g, 2a) in six games against Hershey.

BEARS VS. WOLF PACK AT-A-GLANCE:
Entering the week, the Bears are 1-2-0-0 against Hartford prior to the upcoming trip to the Insurance Capital of the World. Bears forward Henrik Borgstrom leads the season series in scoring with four points (2g, 2a) in three games. Bears captain Dylan McIlrath has chipped in a pair of assists against his former club. Goaltender Hunter Shepard earned Hershey’s lone win against Hartford on Saturday, making 18 saves to earn his third consecutive victory. The Wolf Pack will return to Chocolatetown for one final visit on Feb. 11.

ALL GOOD THINGS MUST COME TO AN END:
Sunday’s loss to Hartford saw Hershey’s hot start at home without a regulation loss come to an end at nine games. Hershey’s 8-0-1-0 record on GIANT Center ice was the best start at home since the venue opened in time for the 2002-03 season. It also marked the best start at home without a regulation loss since the 1985-86 campaign, when Hersheypark Arena played host to a Bears squad that went 12-0-1 on its ice before suffering an 8-5 defeat to the Binghamton Whalers on Dec. 14.

DEEP IN THE CREASE:
Hershey entered the week as the only squad in the AHL with a pair of goaltenders to each record at least three victories in the month of November. In the first full month of the season, Zach Fucale has gone 3-2-0 with a 2.21 goals-against average and a save percentage of .915, while Hunter Shepard has gone 3-0-0 with a 1.64 GAA and a save percentage of .938. Fucale’s six total wins on the season are tied for the third most among all AHL netminders.

FIRST PERIOD SUCCESS:
The Bears have a league-leading +11 goal differential in the opening frame this season. Hershey has posted a 7-2-2-0 record when scoring in the first period, and has gone 7-1-0-0 when not allowing a goal in the opening frame. Hershey is also tied for the league lead (along with Springfield and Providence) with the most first goals (10).

LAPPIERRE LIVING LARGE:
Rookie forward Hendrix Lapierre has been thriving with Hershey in his first full professional season, as he is tied for the team lead in scoring with 11 points (4g, 7a). The point totals for the 2020 first-round selection of the Washington Capitals has Lapierre tied for ninth in the AHL rookie scoring race. Hershey has posted a record of 8-1-0-0 when Lapierre records at least a point. The Bears are also 4-0-0-0 when Lapierre scores a goal, a record that is shared with teammate Mike Vecchione.