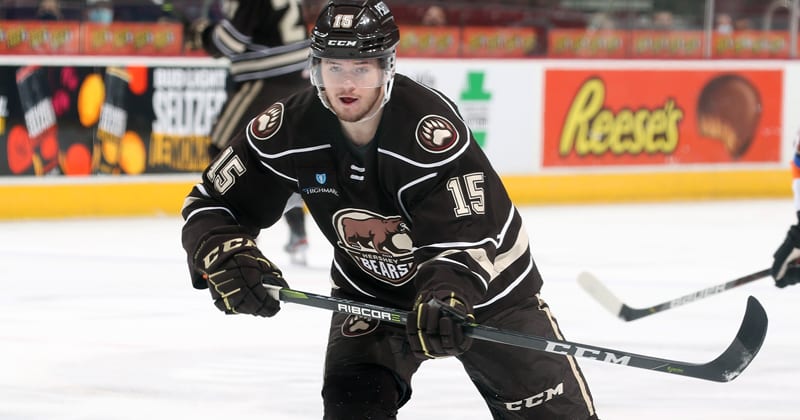 The Washington Capitals, the NHL affiliate of the Hershey Bears, announced today that forward Connor McMichael has been loaned to Hershey. The announcement was made by Washington senior vice president and general manager Brian MacLellan.

McMichael, 21, has appeared in six games with the Capitals this season. He recorded 18 points (9g, 9a) in 68 games with Washington during the 2021-22 campaign, leading Capitals rookies in goals and points.

The Ajax, Ontario native returns to Hershey where he skated with the Bears during his first professional season in 2020-21. That year, he led Hershey in goals (14) and points (27), appearing in all 33 of the Bears’ games. McMichael ranked tied for second in goals and sixth in points among AHL rookies and ranked first in game-winning goals (8) and tied for fourth in power play goals (6) among all AHL skaters. McMichael was named to the AHL North Division All-Star Team and the AHL All-Rookie Team, becoming the first Capitals prospect to receive the honor since John Carlson (2009-10). He also became the first Hershey rookie to lead the team in scoring since Craig Fisher accomplished the feat in the 1990-91 campaign.

McMichael will wear #14 for Hershey and will join the team for today's game.

Hershey continues the 2022-23 season, presented by Penn State Health, when the Bears square off against the Wolf Pack again at GIANT Center for Hockey Fights Cancer Night and Penn State Health Rally Towel Night today at 4:30 p.m. Following the game, the Bears will auction off their Hockey Fights Cancer jerseys. The Hershey Bears Hockey Club donates a portion of the sale of all jersey auctions to a number of area nonprofit organizations as part of its community-focused Hershey Bears Cares initiative. Beneficiaries for Sunday’s jersey auction include the Leukemia & Lymphoma Society and the American Cancer Society. Purchase tickets for the game by CLICKING HERE.