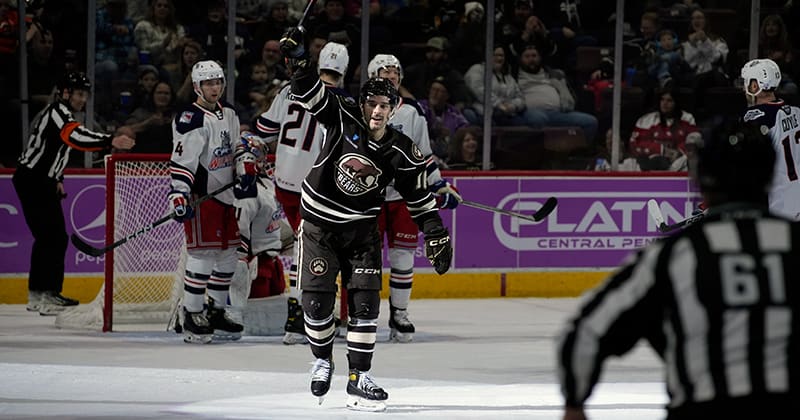 The line of Mason Morelli, Henrik Borgstrom and Garrett Pilon drove the offense for the Hershey Bears (9-3-2-0) in the first period on Saturday night, as each forward scored a goal and assist in the opening frame, while Sam Anas celebrated his 100th pro goal with a strike in the second period as the Chocolate and White established a new season-high for goals in an eventual 6-1 victory over the Hartford Wolf Pack (4-5-1-3) at GIANT Center.

With the win, Hershey extended its undefeated in regulation start to the season on home ice to nine games (8-0-1-0), and gave the Bears its sixth consecutive home victory.

The Bears raced out to a three-goal lead in the opening frame, as Morelli struck first at 9:50 after jamming the puck past Louis Domingue at the left post during a goalmouth scramble, with Pilon and Borgstrom receiving credit for the assists.

Hershey made it 2-0 when Bobby Nardella negated a Hartford breakout at the blue line and dished the puck across to Aaron Ness, who fed a backhand pass to Borgstrom in the high slot. Borgstrom fired a wrist shot over the glove of Domingue for his third of the season at 16:50 that eventually stood up as the game-winner.

Pilon ensured his line completed a trio of goals with 1.3 seconds left in the frame as he fired the puck from a sharp angle at the left of the net that eluded Domingue for his second of the season, with Morelli and Logan Day assisting.

The Wolf Pack replaced Domingue in net with Dylan Garand to begin the second, but the Bears continued the onslaught, as Anas reached the century mark for career goals when he deflected Vincent Iorio’s shot from the right point past Garand at 5:50 for his fourth of the season. Gabriel Carlsson received credit for the secondary assist.

The Bears converted on the power play at 9:10 when Anas passed the puck to Mike Sgarbossa, who then spun around in the slot and found Mike Vecchione at the left circle for a back-door play that Vecchione finished with his fourth of the season to make it 5-0.

Hartford broke through Hershey’s defenses at 16:23 when Andy Welinski managed to snipe a shot past Hunter Shepard, cutting the lead for the Bears to 5-1.

Pilon sustained a lower-body injury at 18:47 of the second period that forced him out for the remainder of the game.

The Bears made it 6-1 at 19:46 when Hendrix Lapierre buried a Dylan McIlrath rebound that briefly went to video review when it appeared Garand got a piece of Lapierre’s shot with the paddle of his goalie stick, but it was confirmed that the puck had fully crossed the goal line, giving the Bears rookie his fourth of the season. Shane Gersich added the secondary helper.

Shots finished 32-19 favoring Hershey. Shepard went 18-for-19 for Hershey, while Domingue took the loss going 6-for-9 and Garand went 20-for-23 in relief. The Bears were 1-for-2 on the power play, while the Wolf Pack did not have an opportunity with the man advantage.

Hershey continues the 2022-23 season, presented by Penn State Health, when the Bears square off against the Wolf Pack again at GIANT Center for Hockey Fights Cancer Night and Penn State Health Rally Towel Night on Sunday, Nov. 20 at 4:30 p.m. Following the game, the Bears will auction off their Hockey Fights Cancer jerseys. The Hershey Bears Hockey Club donates a portion of the sale of all jersey auctions to a number of area nonprofit organizations as part of its community-focused Hershey Bears Cares initiative. Beneficiaries for Sunday’s jersey auction include the Leukemia & Lymphoma Society and the American Cancer Society. Purchase tickets for the game by CLICKING HERE.