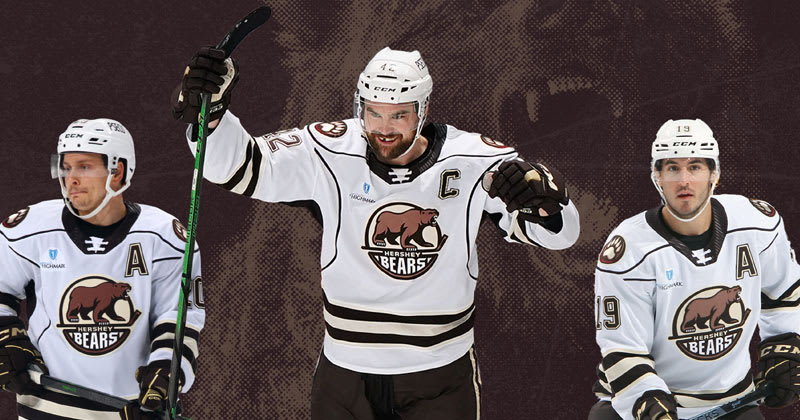 The Hershey Bears announced today that defenseman Dylan McIlrath has been named captain for the 2022-23 season. McIlrath becomes the 45th captain in the franchise’s storied history. In addition, the team has rounded out its leadership group by announcing defenseman Aaron Ness and forward Mike Vecchione will serve as alternate captains.

McIlrath, 30, enters his second season with the Chocolate and White. The veteran blueliner finished the 2021-22 campaign with 10 points (4g, 6a) while leading the club in games played (74) and penalty minutes (99). McIlrath also matched his previous career-high with 100 shots on goal.

In 11 seasons of professional hockey, McIlrath has appeared in 566 career games, with 66 games in the NHL with the New York Rangers, Florida Panthers and Detroit Red Wings, with five points (2g, 3a) and 121 penalty minutes. McIlrath was selected in the first round, 10th overall, by the New York Rangers in the 2010 NHL Draft.

The 6’4”, 235-pound defenseman’s AHL resume includes 500 matches with Connecticut/Hartford, Springfield, Grand Rapids and Hershey. McIlrath has accumulated 100 points (27g, 73a) and 1,002 penalty minutes during his AHL tenure, and captured the Calder Cup in 2017 with Grand Rapids under current Bears head coach Todd Nelson.

The native of Winnipeg, Manitoba succeeds Matt Moulson as captain of the Bears, after previously serving as an alternate captain last season.

Ness, 32, returns to the Bears after playing four seasons with the club from 2015-19. The Roseau, Minn. native has appeared in 239 games with the Chocolate and White, scoring 128 points (20g, 108a). In his first season with the Bears, Ness helped Hershey to the 2016 Calder Cup Finals, leading the AHL with 12 postseason assists over 21 games.

His best season with Hershey came in 2018-19. Ness, one of the club's alternate captains, collected a career-high 55 points (5g, 50a) over 71 games, registering a +24 rating. He led all AHL defenders in assists and points, and was named to the AHL Second All-Star Team. He ranks tied for 18th all-time in scoring among defenders in Hershey’s team history.

Vecchione, 29, returns for his second season with the Bears after leading the team in scoring during the 2021-22 season with 44 points (16g, 28a) in 59 games. Vecchione was subsequently signed to a one-year extension by the Washington Capitals on Mar. 28.

The 5’10”, 193-pound forward has played five seasons of professional hockey, with 270 games spent in the AHL with Lehigh Valley, San Antonio, Colorado and Hershey, collecting 168 points (17g, 23a).

The native of Saugus, Massachusetts has also skated in three NHL games with the Philadelphia Flyers and Washington.

McIlrath, Ness and Vecchione, along with the rest of the Bears, open the 2022-23 season, presented by Penn State Health, on Saturday Oct. 15 at 7 p.m. versus the Utica Comets. It's PNC Bank Magnet Schedule Night for the first 8,000 fans. The club will also host a Home Opener Red Carpet Event starting at 3:30 p.m. prior to the 7 p.m. puck drop. Single game tickets are on sale now. Click HERE for more information.