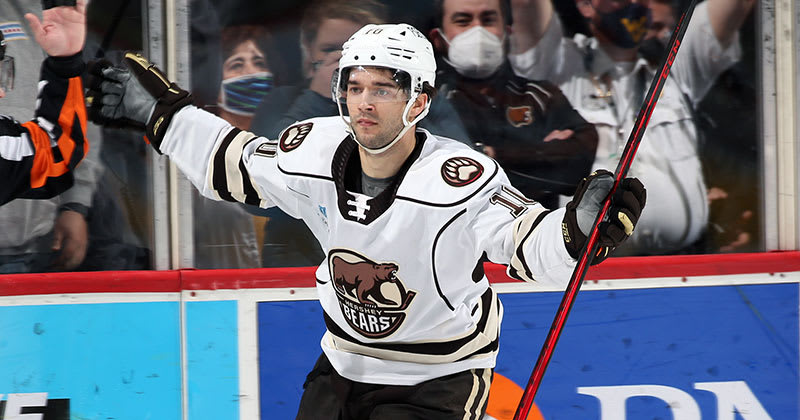 Gersich Returns to Hershey on AHL Deal for 2022-23

The Hershey Bears announced today the club has signed forward Shane Gersich to an American Hockey League contract for the 2022-23 season. The announcement was made by Hershey's vice president of hockey operations Bryan Helmer.

Gersich, 26, is coming off a career-year with the Bears in 2021-22, collecting 34 points (14g, 20a) over 71 games. He set new personal bests in games played, goals, assists, points, and penalty minutes (60). Gersich, who plays all forward positions for Hershey, ranked tied for fifth on the team in scoring, added three game-winning goals, and ranked second on the team in shots (152).

The native of Chaska, Minn. has played four seasons with Hershey, compiling 90 points (38g, 52a) in 224 games. A key cog on Hershey's penalty kill, Gersich has scored five career shorthanded goals. He's also skated in nine playoff games for the Bears in his tenure, posting three points (1g, 2a).

The 5'11", 180-pound forward was selected in the fifth round of the 2014 NHL Draft by Washington. After an accomplished career at the University of North Dakota, including an NCAA title in 2016, Gersich joined the Capitals late in the 2017-2018 season. He skated in three games for Washington that year, tallying one assist, and also appeared in two postseason games en route to Washington's 2018 Stanley Cup win.

The Bears open the 2022-23 season, presented by Penn State Health, versus the Utica Comets at 7 p.m. on Saturday, Oct. 15 at GIANT Center. Single game tickets go on sale on Thursday, Sept. 1 at 10 a.m. Fans may join the Season Ticket Holder community with plans starting at less than $12 per game. Choose your games and seats with Full and Partial plans available now. Click HERE for more.