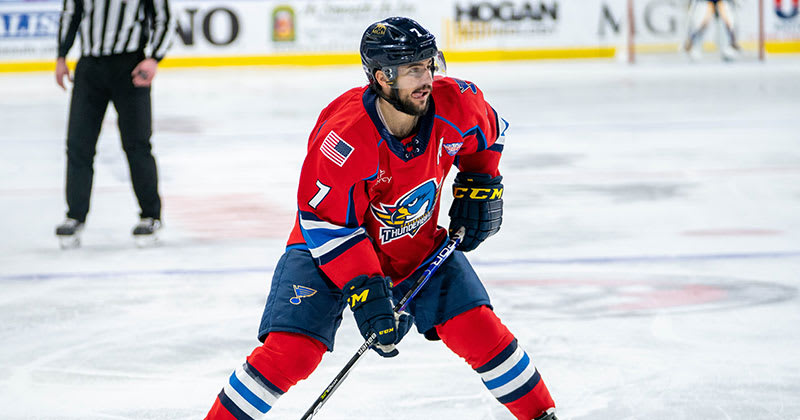 The Hershey Bears announced today that the club has signed forward Sam Anas to an American Hockey League contract for the 2022-23 season. The announcement was made by Hershey vice president of hockey operations Bryan Helmer.

Anas, 29, has been one of the AHL's top players in recent years. Last year, the native of Potomac, Maryland collected 64 points (20g, 44a) in 75 games to lead the Springfield Thunderbirds in scoring. In addition to serving as the club leader in assists and points, he posted a team-best 20 power play assists and also led the club with three shootout goals. His 64 points were the most by a Springfield player since the T-Birds joined the AHL in 2016.

The 5'8", 157-pound winger served as an alternate captain for Springfield last season and helped the Thunderbirds to an appearance in the Calder Cup Finals. He notched 15 points (4g, 11a) in 18 postseason games for Springfield, striking for four multi-point games in the playoffs. He was named the recipient of the league's Fred T. Hunt Memorial Award as the AHL player who best exemplifies the qualities of sportsmanship, determination, and dedication to hockey.

Anas enjoyed a three-year standout career at Quinnipiac University from 2013-16. The All-American registered 132 points (69g, 63a) in 121 games, and helped the Bobcats to a 2016 conference championship. He led Quinnipiac in scoring in all three of his seasons with the club.

Anas is a product of the Washington Little Caps and Team Maryland programs. He participated in the Washington Capitals 2013 Development Camp and was teammates with Capitals forward and former Bear Joe Snively at Landon School. He and Snively helped the Landon Bears to an undefeated 25-0-1 season and a Mid-Atlantic Prep Hockey League title in 2011, and Anas was named the league's player of the year, striking for 72 points (46g, 26a).

Anas and the Bears open the 2022-23 season, presented by Penn State Health, versus the Utica Comets at 7 p.m. on Saturday, Oct. 15 at GIANT Center. Fans may join the Season Ticket Holder community with plans starting at less than $12 per game. Choose your games and seats with Full and Partial plans available now. Click HERE for more.