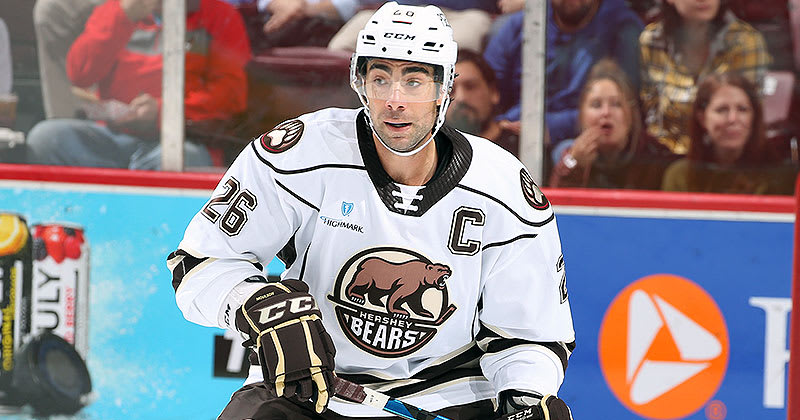 Hershey Bears captain Matt Moulson has announced his retirement from professional hockey and has joined the National Hockey League's Toronto Maple Leafs as a pro scout.

"The Hershey Bears congratulate Matt Moulson on his exceptional career," said Hershey vice president of hockey operations Bryan Helmer. "Matt is a first-class person who embraced the history and tradition of Hershey and wanted nothing more than to bring a Calder Cup to Chocolatetown. Matt loves Hershey, and his impact in the community and on the players in the dressing room will be everlasting. We were lucky to have Matt represent our organization with dignity, and we wish him all the best in retirement."

Moulson, 38, played three seasons for Hershey from 2019-22, skating in 119 career games for the Chocolate and White, collecting 82 points (39g, 43a). Moulson was named the 44th captain in franchise history prior to the 2020-21 season, a year in which he led the Bears to the Macgregor Kilpatrick Trophy as the team with the best record in the AHL.

"Hershey will always hold a special place in my heart," said Moulson.

Moulson's accomplished career spanned 16 seasons, and the forward skated in 1074 career games, including in 424 AHL contests. He played his 1,000th professional game with the Bears on Jan. 24, 2020 at Springfield, scoring twice in a victory. The North York, Ontario native represented Hershey as the captain of the Eastern Conference at the 2020 AHL All-Star Classic in Ontario, California, leading the Atlantic Division to the All-Star Challenge title.

At the National Hockey League level, Moulson played 650 games with Los Angeles, the New York Islanders, Buffalo, and Minnesota. Moulson scored 30 or more goals in three consecutive seasons with the Islanders in 2009-12, and in his NHL career, collected 369 points (176g, 193a). He was a finalist for the Lady Byng Memorial Trophy in 2013 and served as an alternate captain for the Buffalo Sabres during the 2014-15 season. Moulson was originally selected in the 9th round of the 2003 NHL Draft by the Pittsburgh Penguins.