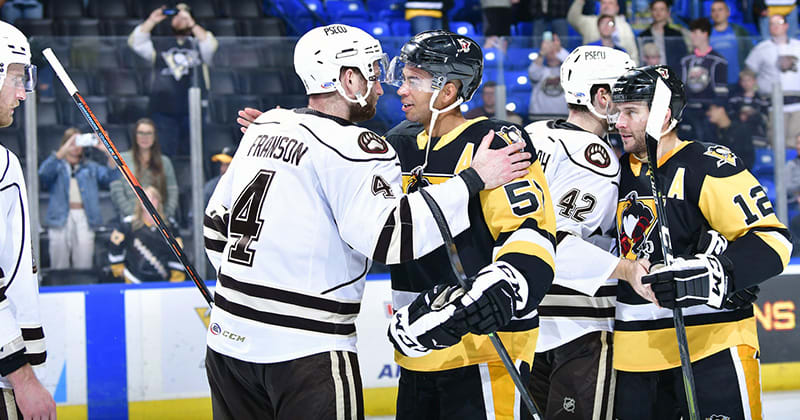 The Hershey Bears rallied with two goals in the closing minutes of the third period to tie the game, but the Wilkes-Barre/Scranton Penguins claimed an overtime win in the decisive Game 3 of the opening round playoff series. Hershey's season and the club's Calder Cup bid ended due to Alexander Nylander's goal at 8:22 of the extra session.

The Bears took a 1-0 lead in Monday's must-win game. Mike Sgarbossa connected for his first goal of the playoffs, tapping the rebound of a Garrett Pilon shot past Wilkes-Barre/Scranton goaltender Tommy Nappier to make it 1-0 Hershey. Pilon and Alex Alexeyev assisted.

Wilkes-Barre/Scranton would tie the game on a fluky goal at 17:38 of the first period. Defenseman Matt Bartkowski fanned on a shot from the point, but it hit Hershey forward Beck Malenstyn's skate and redirected past goaltender Pheonix Copley to make it 1-1.

The game progressed to the third period tied, and Wilkes-Barre/Scranton struck twice to take a 3-1 lead. Radim Zohorna scored at 4:44, snapping a wrist shot from the deep slot. The chance bounded off Copley's glove and trickled past the netminder to make it 2-1 Pens. At 12:05, Sam Poulin snuck another puck past Copley, striking on a shot from the left wing that eluded the goaltender through the five-hole.

In the closing minutes, Hershey pulled Copley for the extra attacker and forced overtime with an improbable comeback. At 18:25, Garrett Pilon scored on a one-timer from the far circle. Lucas Johansen and Bobby Nardella provided the assists on the goal that made it 3-2.

Just 42 seconds later, the Bears tied the game. Hershey jammed the netfront, and Brett Leason banked the puck from behind the net off Nappier and over the goal line to send the Hershey bench into a frenzy. At 19:07, Hershey had tied the game, 3-3, and forced overtime.

In the extra session, the Pens held the play, and after a turnover at center ice, Nylander accepted a Zohorna pass and cut to the middle of the ice, roofing a shot over Copley's glove to end the game, and advance the Penguins to the second round.

Shots finished 46-37 in favor of the Pens. Hershey was 0-for-1 on the power play, while Wilkes-Barre/Scranton was 0-for-2.