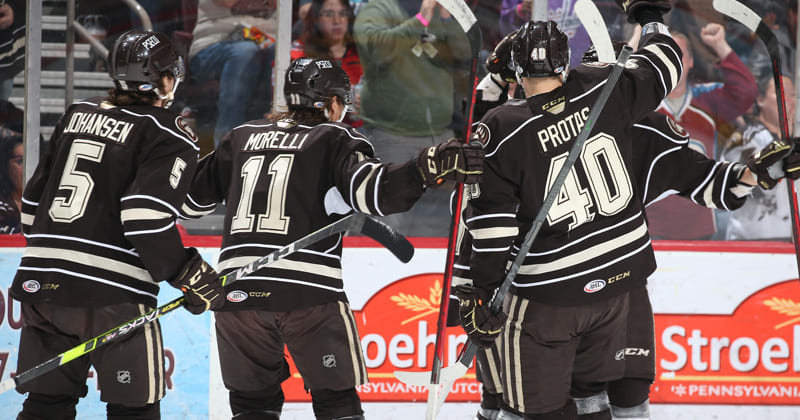 The Hershey Bears earned a 2-1 victory over the Wilkes-Barre/Scranton Penguins in Game 2 of their opening round playoff series on Sunday night at GIANT Center. The victory tied the best-of-three series, 1-1, forcing a decisive Game 3 tomorrow night at the Mohegan Sun Arena at Casey Plaza.

After being shut out in Game 1, Hershey solved Wilkes-Barre/Scranton goaltender Tommy Nappier in the first period. Beck Malenstyn scored a power play goal at 4:07 of the opening frame to make it 1-0 Bears. Mason Morelli and Bobby Nardella assisted on the tally, with Malenstyn tipping Nardella's right point shot into the net.

In the middle frame, Dylan McIlrath scored the eventual game-winning goal at 10:16. The blue liner struck for his first ever Calder Cup Playoff goal in his 50th career Calder Cup Playoff game. The blue liner fired a slap shot from the right point that found its way through traffic and fooled a screened Nappier to make it 2-0 Hershey. Tobias Geisser and Eddie Wittchow assisted on the marker.

Only 30 seconds later, the Baby Pens struck to make it 2-1. Felix Robert redirected a pass from Alexander Nylander past Hershey goaltender Pheonix Copley to cut the lead in half at 10:46. The goal was Robert's first of the postseason.

Copley and the Bears locked it down in the third period to earn the win in the one-goal affair. Shots finished 32-23 Hershey. The Bears were 1-for-3 on the power play while the Pens were 0-for-2.

The series shifts to Wilkes-Barre/Scranton tomorrow for the winner-take-all Game 3. The puck drops at 7:05 p.m. at the Mohegan Sun Arena at Casey Plaza and the game may be heard on the Highmark Bears Radio Network and viewed on AHLTV.