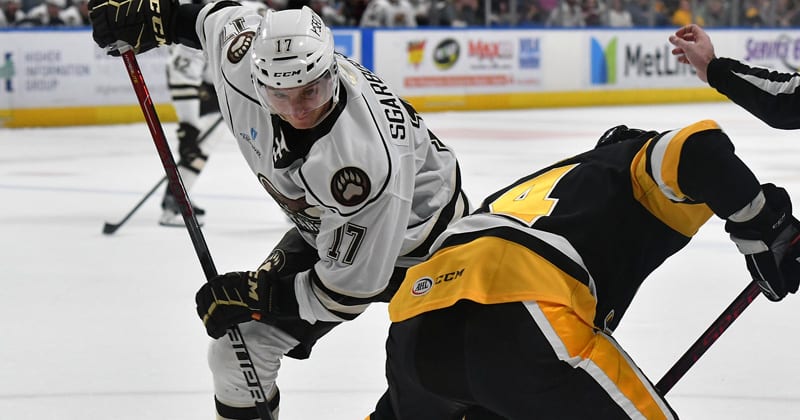 The Hershey Bears were blanked, 3-0, by the Wilkes-Barre/Scranton Penguins in Game 1 of their first round playoff series on Friday night at the Mohegan Sun Arena. Tommy Nappier stopped all 23 Hershey shots to earn a shutout in his Calder Cup Playoff debut, and Hershey now faces a must win Game 2 at GIANT Center on Sunday to keep its season alive.

The Penguins carried the play in the first period, outshooting Hershey 15-3, and striking twice in a 31-second span to grab a 2-0 lead. Defenseman Will Reilly scored the game's opening goal at 8:34 to give the Penguins the early advantage. Jonathan Gruden's cross-rink pass was tipped, but it came to Reilly on the right wing, and he snapped a shot past Hershey goaltender Pheonix Copley to make it 1-0. Gruden and P.O. Joseph assisted on the tally.

At 9:05, the Pens scored again as Alex Nylander tipped a Radim Zohorna shot through Copley and into the net. Zohorna's shot from the deep slot hit Nylander's right skate and changed directions to fool the Hershey netminder.

Hershey generated more offense in the final two periods, including firing 11 shots in the third period, but the Bears failed to solve Nappier. With Cody Franson in the penalty box, and Copley pulled for an extra-attacker, Zohorna finished the win off for the Penguins with an empty net goal at 19:26.

The Bears went 0-for-3 on the power play, while Wilkes-Barre/Scranton was 1-for-2. The Penguins outshot the Bears, 31-23.

A must-win Game 2 at GIANT Center will be played on Sunday, May 8 at 5 p.m., and tickets are on sale now via Ticketmaster. For more information, fans are encouraged to visit HersheyBears.com.