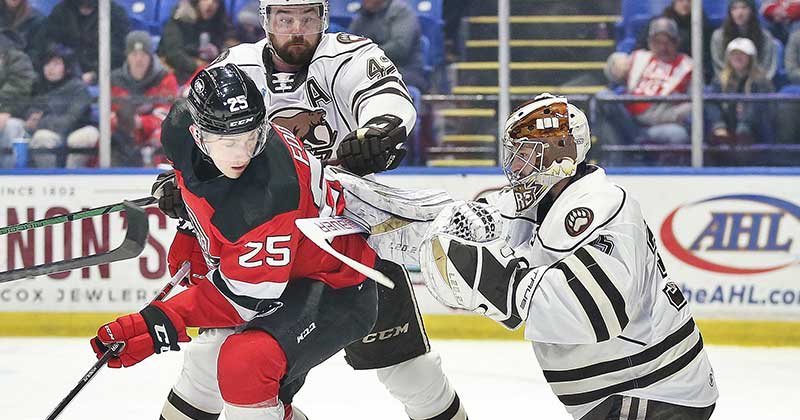 Fucale Shuts Out Comets in 4-0 Win

Zach Fucale turned aside all 34 shots he faced to lead the Hershey Bears to a 4-0 shutout victory over the Utica Comets on Friday night at the Adirondack Bank Center. The shutout was Fucale's first of the season, and the win over the Eastern Conference's best team improved Hershey's record to 26-18-3-3.

Hershey's Aliaksei Protas opened the scoring at 5:25 of the first period. With the Bears on the power play, Protas connected on a wrist shot from the right circle for his third goal of the season. Cody Franson and Mike Vecchione assisted on the marker.

Fucale turned aside 14 shots in the opening period, and Hershey rewarded him with a pair of goals in the second period. Lucas Johansen made a perfect stretch pass through the middle of the ice to a streaking Vecchione. He walked in on a breakaway and snapped a shot off the post and past Utica goaltender Akira Schmid to make it 2-0. The goal was Vecchione's 13th of the season, and the tally came on his 29th birthday.

Johansen assisted on Brian Pinho's seventh goal of the season at 14:39 into the second period, extending Hershey's lead to 3-0. At the end of a shift, Mason Morell walked the puck over the blue line. He fed Johansen on the left wing, and he made a quick pass back to the right to Pinho. The forward ripped a shot over Schmid's blocker to give Hershey the sizable lead.

In the third period, Utica would get aggressive, pulling Schmid for an extra attacker with six minutes to play. Pinho would add his second goal on an empty netter to extend Hershey's lead to 4-0 with Morelli setting him up again at 14:58.

Fucale earned his second shutout as a Bear, stopping 13 more Utica shots in the third period. His 34 saves was the most stops he's made in a game this season. Shots finished 34-25 Utica.

The two teams rematch on Sunday at GIANT Center at 5 p.m. It's AmeriChoice FCU Cowbell Night for the first 4,000 fans. Tickets are available at HersheyBears.com.