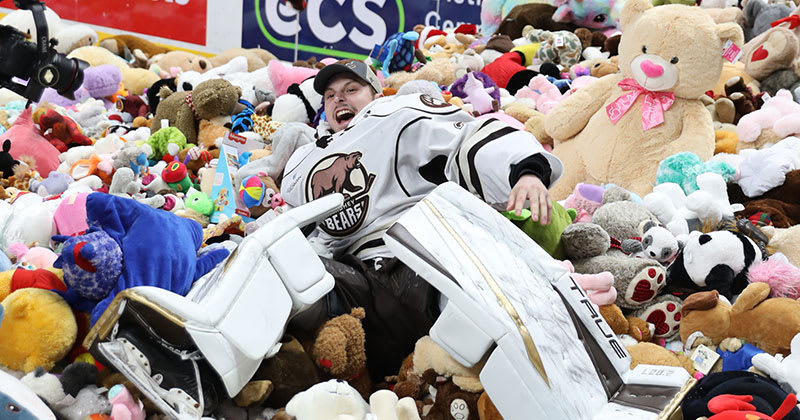 The Hershey Bears topped the Hartford Wolf Pack by a 5-0 margin on Saturday night at GIANT Center. Axel Jonsson-Fjallby recorded a hat-trick, including the game's first goal to send 52,341 stuffed animals into orbit for the GIANT Teddy Bear Toss. All stuffed animals will be donated to over 25 local organizations. Both teams are slated to rematch tomorrow at GIANT Center at 3 P.M.

Jonsson-Fjallby's Teddy Bear Toss goal came only 6:13 into the hockey game on the power play. Shane Gersich and Alex Alexeyev both recorded the helpers. After a lengthy delay for cleanup, the Bears returned to the ice and struck once more prior to the first intermission. Brian Pinho tallied his second goal of the season at 18:04. Shots after 20 minutes were 13-7 Hershey.

Still 2-0 into the final frame, the Chocolate and White scored thrice more to run away with a 5-0 decision. Joe Snively struck unassisted only 23 seconds into the stanza, and Jonsson-Fjallby completed his hat-trick with markers at 3:11 and 13:06. Garrett Pilon finished the night with three assists and Snively finished with one goal, two assists. Pheonix Copley stopped all 23 shots faced for his second shutout of the season. Final shot totals were 36-23 Hershey. The Bears finished 1-for-5 on the power play and 1-for-1 on the penalty kill.