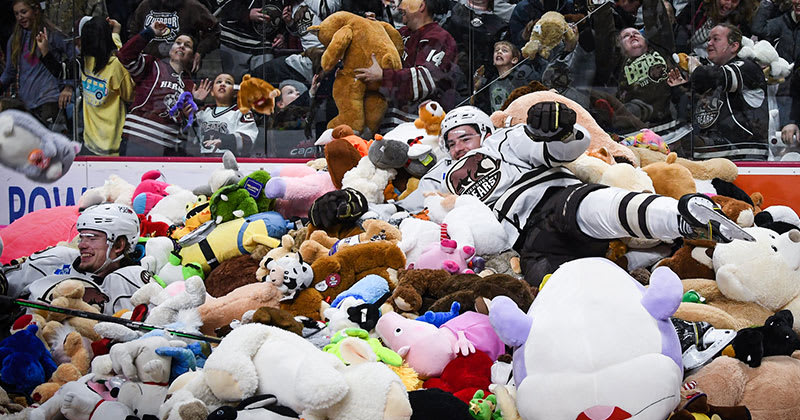 The Hershey Bears continue the 2021-22 season, presented by Penn State Health, with two home games this weekend versus the Hartford Wolf Pack. Two of Hershey's biggest promotional nights of the season are on tap, with the club hosting the GIANT Teddy Bear Toss on Saturday night, and the first Hersheypark Pass Night of the season on Sunday afternoon. Hershey enters this weekend with points in seven straight home games (5-0-1-1), but are looking to snap a three-game skid (0-1-1-1).

RECENT RESULTS:
Wednesday, January 12: Bridgeport 4, Hershey 3 (Shootout)
The Bears opened last week with a 4-3 shootout loss to the Bridgeport Islanders last Wednesday. Hershey scored a pair of shorthanded goals in the first period, getting markers from Shane Gersich and Brian Pinho to lead 2-0 after 20 minutes. Bridgeport would eventually take a 3-2 lead in the third period on an Erik Brown goal, but with a late power play, Joe Snively tied the game for Hershey at 17:44 to force overtime, and the eventual shootout. Michael Dal Colle had the lone goal of the skills competition to give Bridgeport the extra point.

Saturday, January 15: Toronto 4, Hershey 3 (Overtime)
The Hershey Bears dropped a 4-3 decision in overtime last Saturday to the Toronto Marlies. Hershey extended it's home point streak to seven games (5-0-1-1), but Alex Steeves scored twice, including the winner 1:21 into overtime to give the Marlies the victory. Hershey opened the scoring with a shorthanded goal from Axel Jonsson-Fjallby, and also got goals from Garrett Pilon and Tobias Geisser in the loss. It was Toronto's lone visit to GIANT Center this season, and the Marlies first appearance in Hershey since Mar. 15, 2019. Hershey fired a season-high 44 shots in the loss.

Sunday, January 16: Wilkes-Barre/Scranton 2, Hershey 1
The Bears fell to Wilkes-Barre/Scranton for the first time this season, dropping a 2-1 contest at the Mohegan Sun Arena last Sunday. Hershey is now 7-1-0-0 versus its I-81 rivals this season. The Penguins opened the scoring in the second period on an Alexander Nylander power play goal, but with just seven seconds left in the period, Shane Gersich scored on a rebound to tie the game, 1-1. In the third period, a neutral zone turnover led to Patrick Watling's first goal of the season, which proved to be the winner for the Penguins.

UPCOMING SCHEDULE:
-Saturday, Jan. 22 vs. Hartford, 7 p.m.
GIANT Teddy Bear Toss
During the GIANT Teddy Bear Toss, all fans are encouraged to bring new stuffed Items to the game to toss on to the ice as the Bears score their first goal. All items collected will be donated to local charities.

TEDDY BEAR TOSS TIME:
In a sight that truly must be seen, thousands upon thousands of stuffed animals will come raining down on Saturday evening at GIANT Center. The Bears take the ice to battle the Hartford Wolf Pack that evening at 7 p.m., and this world-famous event sees fans throw teddy bears and other stuffed animals onto the ice following the team's first goal of the game. In 2019, Hershey collected 45,650 plush toys, a world record.  As part of the club's Hershey Bears Cares initiative, which showcases the philanthropic activities and volunteer efforts of Bears players and staff members throughout the community, teddy bears and stuffed animals are collected and donated to more than 25 local organizations.

TEDDY BEAR HISTORY:
This year's GIANT Teddy Bear Toss marks the 20th event in team history. The club has collected an estimated 269,858 plush toys since 2001. Last year, the Bears could not hold the Teddy Bear Toss in its traditional form due to the pandemic but still collected 31,381 plush toys in a drive-thru setting. This year marks the second consecutive time Hershey has played Hartford on the night of the Teddy Bear Toss. In 2019, Hershey defeated the Wolf Pack, 4-3 in overtime, on Dec. 1. Christian Djoos scored the first period goal that sent a world record 45,650 stuffed animals flying to the ice. Hershey's all-time record on Teddy Bear Toss is 13-2-0-2 in addition to two ties. Hershey has won five straight Teddy Bear Toss games.

BEARS BITES:
Joe Snively owns an 11-game point streak on home ice, collecting 15 points (6g, 9a) in the stretch...Defenseman Lucas Johansen has an assist in his last three outings for the club...The Bears are 9-3-3-2 in one-goal games this season, but dropped three contests of that variety last week, going 0-1-1-1...The Wolf Pack won the previous meeting between Hershey and Hartford by a 7-3 score at the XL Center on Nov. 20. Shane Gersich had a goal and an assist in that game for the Bears...Gersich has seven goals over his past eight games for the Bears and has tied his career-high of 10 goals set during the 2019-20 season.