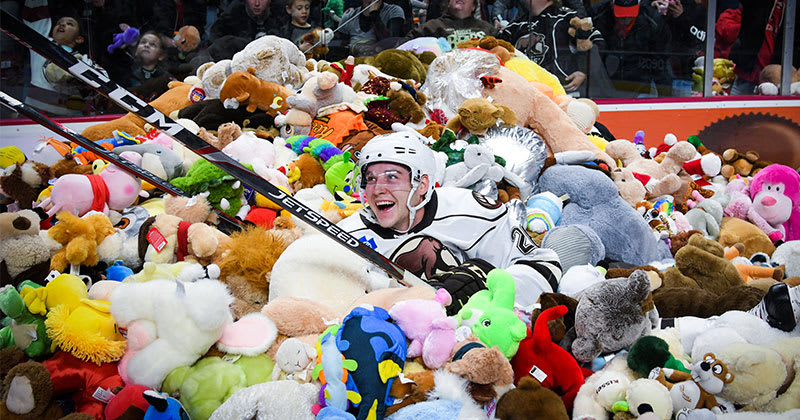 Join us for the GIANT Teddy Bear Toss This Saturday

The Hershey Bears will host the GIANT Teddy Bear Toss on Saturday, Jan. 22, 2022, at GIANT Center at 7 p.m. Fans are encouraged to bring new or gently used plush toys to the game to be thrown on the ice when the Bears score their first goal of the game.

The GIANT Company and Hershey Entertainment & Resorts (HE&R) also announced a long-term extension of the naming rights for GIANT Center, home of the Bears, through September 2033.

“HE&R is so pleased to continue our incredible partnership with The GIANT Company. Together, we have helped to establish GIANT Center as an award-winning premier sports and entertainment venue - bringing the type of acts typically reserved for major cities to Central Pennsylvania,” said Leslie Ferraro, vice president & Chief Marketing Officer, HE&R. “We look forward to this next phase of partnership and cannot wait to continue expanding the GIANT Center’s offerings in our region.”

To commemorate the extension, The GIANT Company is making a $20,000 donation to the Central Pennsylvania Food Bank to help feed neighbors in need across the Susquehanna Valley.

“In all that it does, The GIANT Company works to bring families together and create memories. In Central Pennsylvania, no one does that quite like the GIANT Center does and that’s why we’re honored to continue our long-standing relationship with Hershey Entertainment & Resorts,” said Matt Simon, vice president of brand experience, The GIANT Company. “Much like HE&R, we’re committed to making a difference in the communities we serve. It’s only fitting to celebrate the extension of our partnership in conjunction with the 20th anniversary of the GIANT Teddy Bear Toss, and to make it even more of an occasion, we’re thrilled to mark this milestone with a donation to our friends at the Central Pennsylvania Food Bank.”

This year's GIANT Teddy Bear Toss marks the 20th game in team history. In 2019, Hershey collected 45,650 plush toys, a world record. The club has collected an estimated 269,858 plush toys since 2001. Last year, the club could not hold the Teddy Bear Toss in its traditional form due to the pandemic but still collected 31,381 plush toys in a drive-thru setting.

As part of the club's Hershey Bears Cares initiative, which showcases the philanthropic activities and volunteer efforts of Bears players and staff members throughout the community, teddy bears and stuffed animals are collected and donated to more than 25 local organizations, including Dauphin County Children and Youth, Cocoa Packs, Boys & Girls Club of Harrisburg, Palmyra Lions Club, Autism Society Greater Harrisburg Area, and Children's Miracle Network Hershey. For the seventh year, the Sweigart Family Foundation will pledge $1 per plush toy for all plush toys collected until the 2019 record is achieved. If the Hershey Bears fans, widely considered the best fans in the American Hockey League, break the 2019 record by one plush item, the foundation will increase the gift to $50,000.

A limited number of tickets for the Teddy Bear Toss game are currently available. For tickets and additional information about the Hershey Bears, please visit www.hersheybears.com.