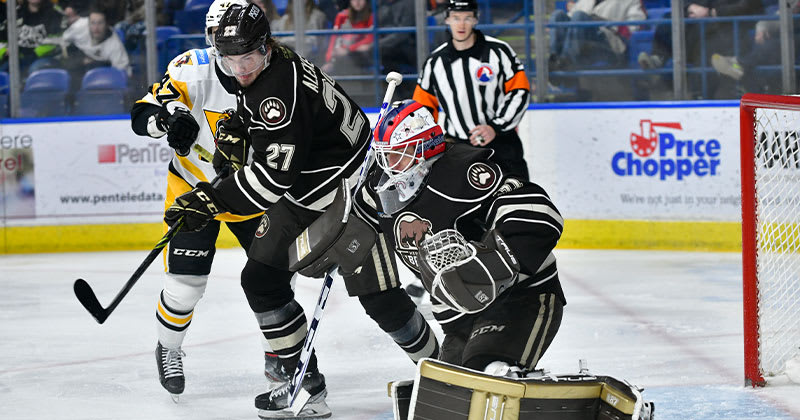 Gersich Scores in 2-1 Setback at Wilkes-Barre/Scranton

The Hershey Bears dropped a 2-1 decision on Sunday evening against the Wilkes-Barre/Scranton Penguins at Mohegan Sun Arena. Hershey's record in their head-to-head season series versus the Pens slides to 7-1-0-0. Shane Gersich scored the lone goal for the Chocolate and White.

Following a scoreless opening frame, Wilkes-Barre/Scranton drew first blood at 5:25 of the 2nd period. Alexander Nylander beat Pheonix Copley to his left post on the man-advantage while Mason Morelli served a slashing minor. The Bears finished the night 3-for-4 on the penalty kill. Seconds before the stanza expired, Gersich knotted the score following an offensive zone faceoff win. On a persistence play, Gersich squeezed a loose puck in the blue paint across the goal line at 19:54. Morelli and Lucas Johansen recorded the assists. Shots after 40 minutes were 16-13 Penguins.

In the final period, Wilkes-Barre/Scranton capitalized off a neutral zone turnover, and Patrick Watling scored the eventual game-winner at 9:17. After a steal near center ice, Nathan Legare fed Watling for the headman pass and potted his first goal as a Penguin and third of his American Hockey League career. Final shots on goal totaled 26-24 Wilkes-Barre/Scranton.

The Hershey Bears return to GIANT Center for the GIANT Teddy Bear Toss Night on Saturday, January 22 at 7 P.M. All fans are encouraged to bring new, stuffed items to the game to toss onto the ice when the Bears score their first goal. All items will be collected and donated to local charities. Limited tickets are still remaining. Visit HersheyBears.com for more information.