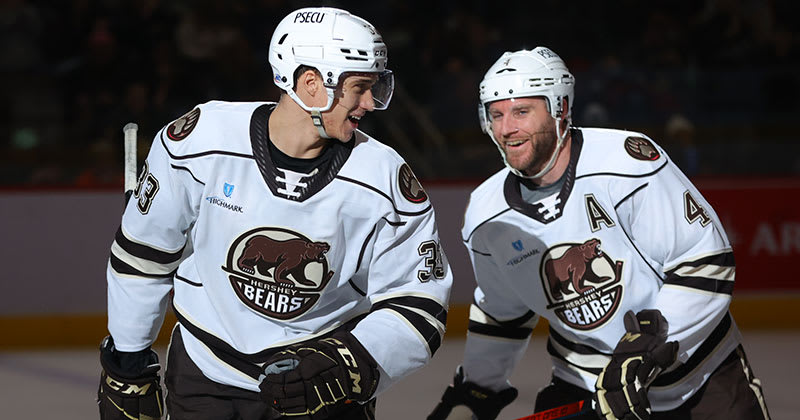 The Hershey Bears dropped a 4-3 overtime decision against the Toronto Marlies on Saturday night at GIANT Center. Hershey received multi-point performances from Axel Jonsson-Fjallby and Garrett Pilon, and set a new single-season high for shots on goal in a game with 44.

Jonsson-Fjallby's goal marked Hershey's sixth shorthanded strike of the season and stood as the opening frame's lone tally. At 16:39, Jonsson-Fjallby finished a shorthanded rush after fielding a pass from Lucas Johansen. Brian Pinho recorded the secondary assist. Shots after 20 minutes were 22-6 Bears.

Filip Kral found the equalizer for Toronto at 5:21 of the 2nd period off a set play following a face-off to Zach Fucale's left. Garrett Pilon regained Hershey's lead with a power play marker at 7:12 by finishing a give-and-go play with Jonsson-Fjallby. Before the frame expired, the Marlies pulled even on Alex Steeve's 10th goal of the season at 14:10. Shots after 40 minutes were 29-14 Hershey in addition to the 2-2 deadlocked score.

Josh Ho-Sang scored on the power play for the Marlies only 50 seconds into the 3rd period, but Tobias Geisser answered on a center-point blast at 7:10. In sudden-death overtime, Steeves buried his second goal of the night on a rebound try following Kral's initial shot at the 1:21 mark.

Final shots on goal totaled 44-22 Hershey. The Bears finished 1-for-3 on the power play and 3-for-4 on the penalty kill.

The Hershey Bears return to GIANT Center for the GIANT Teddy Bear Toss Night on Saturday, January 22 at 7 P.M. All fans are encouraged to bring new, stuffed items to the game to toss onto the ice when the Bears score their first goal. All items will be collected and donated to local charities. Limited tickets are still remaining. Visit HersheyBears.com for more information.