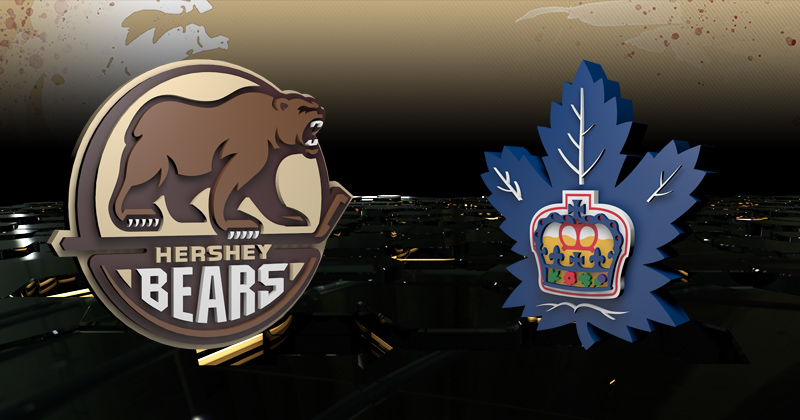 The Hershey Bears continue the 2021-22 season, presented by Penn State Health, tonight against the Toronto Marlies at GIANT Center. The Marlies are the American Hockey League affiliate of the NHL's Toronto Maple Leafs. Tonight is Toronto's lone visit to the GIANT Center this season, and the first of two head-to-head meetings this year.

LAST TIME OUT:
The Hershey Bears enter tonights' game with points in six straight contests on home ice. The club is coming off a 4-3 shootout loss to the Bridgeport Islanders on Wednesday. Hershey scored a pair of shorthanded goals in the first period, receiving markers from Shane Gersich and Brian Pinho to lead 2-0 after 20 minutes. Bridgeport would eventually take a 3-2 lead in the third period on an Erik Brown goal, but Joe Snively tied the game for Hershey at 17:44 to force overtime and the eventual shootout. Michael Dal Colle had the lone goal of the skills competition to give Bridgeport the extra point. The Marlies were last in action on Wednesday, doubling up the Belleville Senators on home ice, 4-2. Semyon Der-Arguchintsev had a goal and an assist to lift the Marlies to a fourth straight victory.

WELCOME BACK TO CHOCOLATETOWN:
Tonight marks the Toronto Marlies first visit to Hershey since the 2018-19 season. The last time the two teams squared off at GIANT Center was on Mar. 15, 2019, a 5-4 overtime win for the Marlies. Jeremy Bracco led the way for the Marlies with three points (1g, 2a) and Jordan Subban, who played in one game for Hershey earlier this season, had a goal for Toronto. Chris Mueller scored the overtime winner for the visitors, while current Bear Garrett Pilon had a goal for the Chocolate and White. Tonight is the first meeting overall between the two clubs since Oct. 16, 2019, a 4-3 win for the Marlies at the Coca-Cola Coliseum. The two clubs were scheduled to play at GIANT Center on Mar. 14, 2020, but the AHL season was suspended due to the COVID-19 pandemic one day prior.

THE SNIVELY STREAK:
Joe Snively continues to pace Hershey in points with 31 (11g, 20a), ranking tied for 6th in the AHL scoring race. The Yale product is currently on a league-best 10-game home point-scoring streak (6g, 8a). The streak dates back to Nov. 14. In total, Snively has collected points in eight straight games (3g, 6a), the longest streak of an active AHL player. Tonight is Snively’s third career game versus Toronto. He tallied one assist in the previous two outings versus the Marlies.

100 FOR AL:
Defenseman Alex Alexeyev is slated to play his 100th game as a member of the Chocolate and White this evening. Over three seasons with the Bears, Alexeyev has posted 36 points (6g, 30a), a +21 rating, and 51 penalty minutes. Alexeyev has collected six points (1g, 5a) in 29 games this season and made his NHL debut with the Washington Capitals on Dec. 29 versus Nashville.