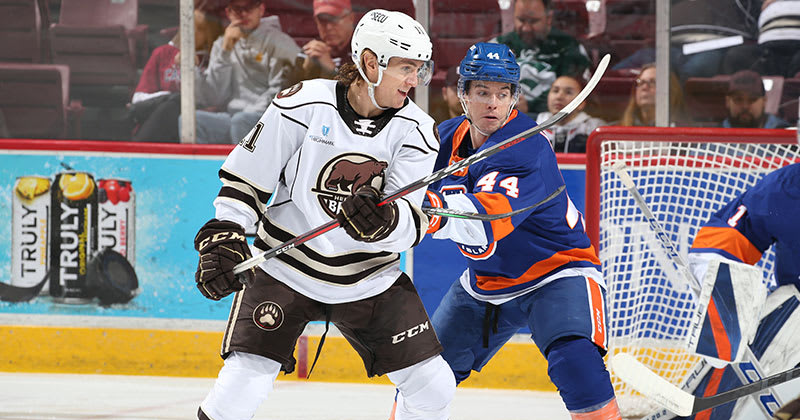 The Hershey Bears dropped a 4-3 shootout decision against the Bridgeport Islanders on Wednesday night at GIANT Center. The Bears record shifts to 18-10-2-2 before returning to action on Saturday, Jan. 15 against the Toronto Marlies.

Hershey jumped out to a 2-0 lead in the 1st period courtesy of two shorthanded goals. Shane Gersich opened the scoring with his ninth marker of the season at 12:57 on an offensive rush. Riley Sutter and Tobias Geisser recorded the helpers. Brian Pinho scored his first goal of the season shorthanded at 19:01 after being set up by Axel Jonsson-Fjallby. Shots after 20 minutes were 10-8 Bridgeport.

In the second period, the Islanders erased Hershey's lead with two goals in less than a minute. Seth Helgeson scored on a blast from the left point at 15:02, followed by the equalizer from Paul Thompson at 15:49. Shots after 40 minutes were 22-20 Islanders.

Bridgeport grabbed their first lead of the night late in the final period before the Chocolate and White rallied. After killing a too many men on the ice penalty, Erik Brown vacated the penalty box and scored on a 2-on-1 rush to provide the Islanders a 3-2 advantage. Hershey erased the one-goal deficit at the 17:44 mark on Joe Snively's 11th goal of the season courtesy of Geisser and Jonsson-Fjallby.

The game progressed to overtime and eventually a shootout in a 3-3 deadlock. Michael Dal Colle converted in the first round, and Bridgeport goaltender Jakub Skarek denied all three Bears shooters to hand the Isles the 4-3 victory.

Final shots on goal totaled 30-29 Hershey. The Bears finished 0-for-2 on the power play and 3-for-3 on the penalty kill.