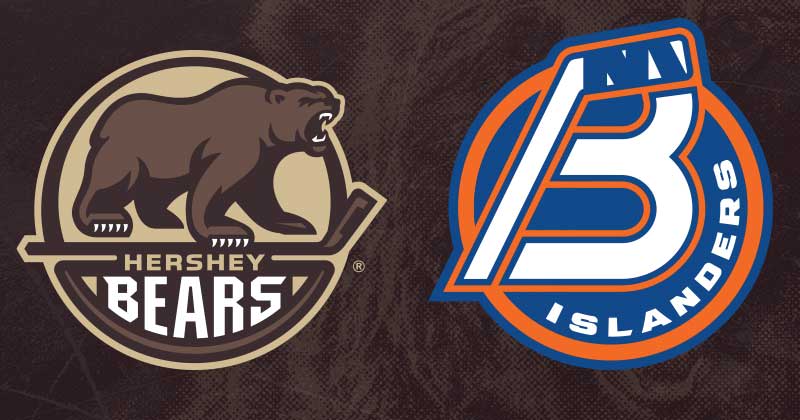 The Hershey Bears continue the 2021-22 season, presented by Penn State Health, tonight against the Bridgeport Islanders at GIANT Center. The Islanders are the American Hockey League affiliate of the NHL's New York Islanders. The Bears enter tonight's game with five straight wins at home. This is the second of six meetings in the season series between Hershey and Bridgeport.

LAST TIME OUT:
The Hershey Bears are coming off a victory last Sunday, defeating the Wilkes-Barre/Scranton Penguins 3-2 at GIANT Center. The win improved Hershey to 7-0-0-0 versus its I-81 rivals. After a scoreless first period, Dylan McIlrath tallied his third goal of the season, scoring unassisted at 7:06 of the middle frame. Hershey doubled its lead with a buzzer-beating goal by Mike Vecchione with just one second to play in the period. Garrett Pilon scored the eventual game-winner on the power play in the third period, and Pheonix Copley earned the win in goal with 26 saves. The Islanders dropped a 3-2 shootout decision to the Charlotte Checkers in their last game on Sunday. Parker Wotherspoon and Michael Dal Colle both scored in their loss.

HERE WE GO JOE:
Hershey forward Joe Snively has continued his tear as one of the top offensive players in the league. The 26-year-old winger has posted 30 points (10g, 20a) in 29 games this season, ranking tied for 4th in the American Hockey League in scoring. Snively is on a seven-game point streak (2g, 6a). On home ice, Snively has increased his protection even further, collecting points in a league-best nine straight games (5g, 8a). He has points in 14 of his past 15 games and leads the Bears in assists, points, plus/minus (+16), and shots (85).

BLAST FROM THE PAST:
Bridgeport's roster features goaltender Cory Schneider, a veteran of 409 career NHL games and a former William M. Jennings Trophy winner. If he plays tonight, it will mark Schneider's first game at GIANT Center since the 2009 Calder Cup Finals as a member of the Manitoba Moose. The last time Schneider played in Hershey was Game 5 of that series, as he stonewalled the Bears with 31 saves, earning First Star honors in a 3-2 Manitoba win on Jun. 9, 2009. The Bears would win Game 6, claiming a 10th Calder Cup title, with a 4-1 win over Schneider and the Moose on Jun. 12. The netminder went 2-4 versus Hershey in the series with a 2.43 goals-against average and a .917 save percentage. He has played one game versus Hershey since that time, beating the Bears as a member of the Binghamton Devils in a 4-3 overtime win on Feb. 14, 2020.

BEARS BITES:
Hershey enters tonight with a five-game winning streak at GIANT Center. The Bears are 8-2-0-0 over the past 10 games on home ice and have a division-leading 12 wins on home ice...With Springfield's loss at Toronto on Monday, the Bears are in a tie for 1st Place in the Atlantic Division...Hershey enters tonight having scored a power play goal in three straight games for the first time this season...Bridgeport has points in three straight games (2-0-0-1)...Islanders forward Michael Dal Colle enters tonight's game on a six-game point streak, tallying four goals and two assists in the span...Hershey has won five straight matchups with Bridgeport at GIANT Center.