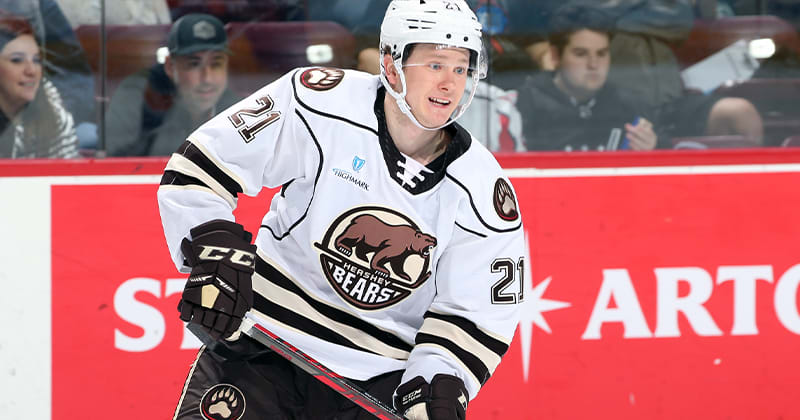 The Hershey Bears continue the 2021-22 season, presented by Penn State Health, with three games this week. The Chocolate and White have won five straight home games and are 7-3-0-0 over the past 10 contests. The Bears enter the week tied for the top spot in the Atlantic Division.

RECENT RESULTS:
Wednesday, January 5: Hershey 4, Lehigh Valley 3 (OT)
The Hershey Bears opened last week with an overtime victory over rival Lehigh Valley, earning the two points despite squandering a 3-0 lead. Joe Snively scored just 17 seconds into the game to give Hershey the lead, and Shane Gersich added his sixth goal of the season at the five minute mark of the opening frame to make it 2-0. Axel Jonsson-Fjallby extended Hershey's lead in the second period, but the Phantoms scored three straight times, including a tying goal from Egor Zamula with 17 seconds remaining in regulation to force overtime. Just 57 seconds into the extra frame, Snively scored his second of the game, swooping a loose puck past Phantoms goaltender Pat Nagle to give Hershey its sixth overtime win this season.

Friday, January 7: Syracuse 5, Hershey 3
Hershey's four-game win streak was snapped last Friday at Syracuse in a 5-3 loss. Axel Jonsson-Fjallby had a pair of goals for the Bears on the power play, and Garrett Pilon also struck for a 4-on-4 goal in the losing effort. Syracuse's Cole Koepke had three points in the contest.

Friday, January 8: Hershey 3, Wilkes-Barre/Scranton 0
The Bears got back in the win column last Saturday, staying perfect versus rival Wilkes-Barre/Scranton with a shutout victory. Shane Gersich tallied twice, including opening the scoring at 17:28 of the first period. Mike Vecchione added to the Bears lead in the second period, scoring on a 5-on-3 power play at 14:51, and Gersich provided the final dagger with his second goal of the game at 15:04 of the third period to make it 3-0. Mason Morelli had two assists in the win and Hershey held the Penguins to 0-for-6 on the power play. Goalie Hunter Shepard stopped all 20 shots he faced for the Bears to earn the clean sheet.

Sunday, January 9: Hershey 3, Wilkes-Barre/Scranton 2
The Bears capped off the weekend with another win over the rival Baby Pens, improving to 7-0-0-0 versus Wilkes-Barre/Scranton this season. After a scoreless first period, Dylan McIlrath tallied his third goal of the season, scoring unassisted at 7:06 of the middle frame. Hershey doubled its lead with a buzzer-beating goal by Mike Vecchione with just one second to play in the period. Garrett Pilon scored the eventual game-winner on the power play in the third period, and Pheonix Copley earned the win in goal with 26 saves.

NO AVERAGE JOE:
Hershey forward Joe Snively has continued his tear as one of the top offensive players in the league. The 26-year-old winger has posted 30 points (10g, 20a) in 29 games this season, ranking tied for 4th in the American Hockey League in scoring. Snively is on a seven-game point streak (2g, 6a). He's on an even better heater on home ice, collecting points in a league-best nine straight games (5g, 8a). He has points in 14 of his past 15 games and leads the Bears in assists, points, plus/minus (+16), and shots (85).

FOLLOW THE SHEPARD:
Goaltender Hunter Shepard has won three straight starts for the Bears, all versus the Wilkes-Barre/Scranton Penguins. He earned a 20-save shutout in a 3-0 win last Saturday, marking the second shutout of Shepard's AHL career, and his first since his AHL debut on Mar. 2, 2021 versus Lehigh Valley. Shepard has stopped 65-of-67 shots in his three games versus the Baby Pens this season. He is 6-1-0 with a 1.43 goals-against average and a .947 save percentage in his AHL career.

BRIAN'S BACK:
Forward Brian Pinho returned to the lineup last Sunday, skating for the Bears for the first time since Nov. 5. The 26-year-old had missed 22 games with an upper-body injury. Pinho has four assists in nine games this season. He was a 20-goal scorer for the Chocolate and White during the 2019-20 campaign, and the North Andover, Mass. native has scored 65 points (32g, 33a) in 154 games with the Bears over parts of four seasons with the club.

THE WEEK AHEAD:
After a stretch of four games in five days last week, the Bears play just three games this week. The club hosts the Bridgeport Islanders for the second time this season on Wednesday. Hershey defeated its Atlantic Division foes 3-2 in overtime on Jan. 2 in the season's first head-to-head matchup. The Toronto Marlies invade GIANT Center on Saturday, playing in Chocolatetown for the first time since Mar. 15, 2019, a 5-4 victory for the visitors. Hershey finishes the week with a road game at Wilkes-Barre/Scranton on Sunday. The Bears are 7-0-0-0 versus their I-81 rivals this season.

BEARS BITES:
The Bears are 16-6-1-0 in Atlantic Division play so far this season...Forward Shane Gersich has points in five of his past six games, collecting nine points (5g, 4a) in that time frame...Hershey defenseman Cody Franson has assists in three straight games. He is tied for second in the league in power play points among defenders with 10...Forward Garrett Pilon has points in four of his past five games and now leads the club in power play goals with four...Over the past six games, Hershey is 16-for-17 (94.1%) on the penalty kill...Hershey's power play has a goal in three straight games...The Bears allow the second least shots per game in AHL at just 26.26 per game.