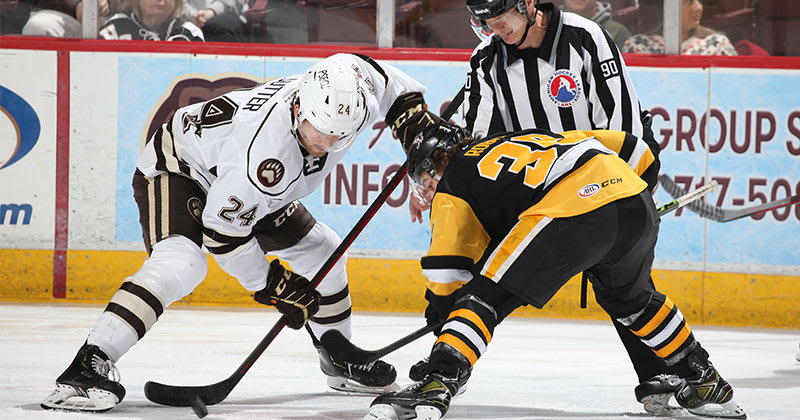 The Hershey Bears concluded four games in five nights with a 3-2 win over the Wilkes-Barre/Scranton Penguins on Sunday night at GIANT Center. Hershey extends their home ice winning streak to five straight, and improves their overall record to 18-10-2-1.

After a scoreless opening period, the Chocolate and White struck twice in the middle frame. Dylan McIlrath scored through traffic on a shot from the left point at 7:06 for his third goal of the campaign. With only one second left in the period, Mike Vecchione doubled his team's advantage. Shane Gersich centered a pass to the low-slot where Vecchione buried his fifth goal of the season before time expired. Shots after 40 minutes were even at 19-19.

Wilkes-Barre/Scranton pushed back in the third period and snapped Pheonix Copley's bid for a shutout. Only 30 seconds into the stanza, Mitch Reinke converted a second chance opportunity from the doorstep to cut his team's deficit to 2-1. Hershey responded with a power play goal from Garrett Pilon at 8:40 which later stood as the game-winner.

Radim Zohorna brought the Penguins within 3-2 with 2:27 remaining after converting a 6-on-4 power play chance. Copley finished the night stopping 26 of 28 Penguin shots to help Hershey claim the one-goal victory.

The Hershey Bears return to action on Wednesday, Jan. 12 against the Bridgeport Islanders. Puck drop at GIANT Center is scheduled for 7 P.M. Ticket information is available online at HersheyBears.com.