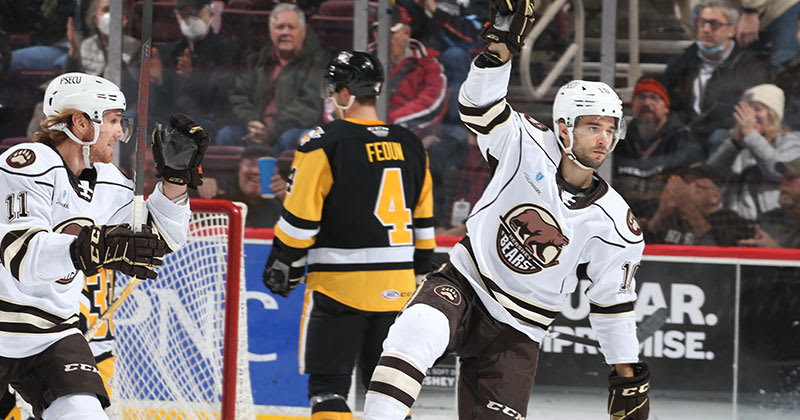 The Hershey Bears shut out the Wilkes-Barre/Scranton Penguins, 3-0, on Saturday night at GIANT Center. Shane Gersich bookended the scoring for the Chocolate and White, and goaltender Hunter Shepard stopped all 20 Penguins shots for the clean sheet. Hershey improves their record to 17-10-2-1.

Gersich started the scoring late in the opening frame after burying a centering pass from Mike Vecchione at 17:28. Mason Morelli earned the secondary helper and later assisted again on Gersich's second goal of the night. Shots after 20 minutes were 15-11 Hershey.

The Bears went to work on a 5-on-3 power play late in the second period and seized the opportunity to add insurance. At the 14:51 mark, Mike Vecchione roofed a shot from the left face-off circle past Pens goaltender Alex D'Orio. Hershey carried a 2-0 lead into the second intermission with a 23-16 shots advantage.

In the final frame, Gersich struck for a second time at 15:04 to finish the scoring line. Morelli sent the puck near the frame, and Gersich squeezed the second effort across the goal line for his eighth goal of the season. Final shots on goal totaled 36-20 Bears.

The Chocolate and White conclude three games in three nights on Sunday, Jan. 9 against the Wilkes-Barre/Scranton Penguins at 5 P.M. It's Toyota Ice Scraper Night for the first 4,000 fans in attendance at GIANT Center. Ticket information is available online at HersheyBears.com.