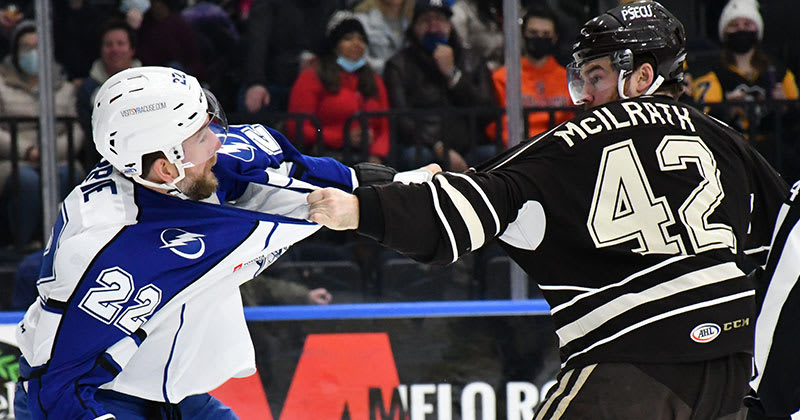 The Hershey Bears opened three games in three nights with a 5-3 setback against the Syracuse Crunch on Friday night at the Upstate Medical University Arena. Axel Jonsson-Fjallby scored twice for the Chocolate and White. The loss snaps Hershey's season-best four-game winning streak.

Syracuse started the scoring only 2:45 into the contest with Cole Koepke's sixth goal of the campaign. Going to the net, Koepke buried a crisp feed across the slot from Gabriel Dumont past Hershey goaltender Pheonix Copley. The Bears found the equalizer at the 8:37 mark on the first of Jonsson-Fjallby's two power play strikes. From the top of the left circle, Jonsson-Fjallby wired home his eighth goal of the season with assists from Lucas Johansen and Alex Alexeyev.

Alex Green answered and restored Syracuse's advantage at the 12:51 mark with his first goal of the season. Shots after 20 minutes were 10-6 Crunch in addition to their 2-1 advantage.

P.C. Labrie opened the middle stanza with an insurance goal only 75 seconds into the period. Later in the frame, Hershey trimmed their two-goal deficit back to one with Jonsson-Fjallby's second power play goal of the night. From the left face-off circle, Jonsson-Fjallby found room low to the ice and snapped a quick release past Crunch netminder Max Lagace. Shots after 40 minutes were even at 16-16 with the Chocolate and White trailing 3-2.

In the final period, Syracuse continued the theme of scoring within the opening minutes. Seconds after a successful Bears penalty kill, Gabriel Fortier scored even-strength with a net front deflection at 1:58. Down 4-2, Hershey saw a quick answer while skating 4-on-4. A crafty pass by Joe Snively sent Garrett Pilon towards the net, and a fancy move and finish brought the Bears within 4-3 on Pilon's 10th goal of the season.

In the final seconds, Alex Barre-Boulet scored into an empty net at 19:51 to round out the 5-3 final. Shots on goal totaled 26-23 Syracuse. The Bears finished the night 2-for-4 on the power play and 2-for-2 on the penalty kill.

The Hershey Bears return to action on Saturday, Jan. 8 on home ice versus the Wilkes-Barre/Scranton Penguins. Puck drop at GIANT Center is scheduled for 7 P.M. Ticket information is available online at HersheyBears.com.