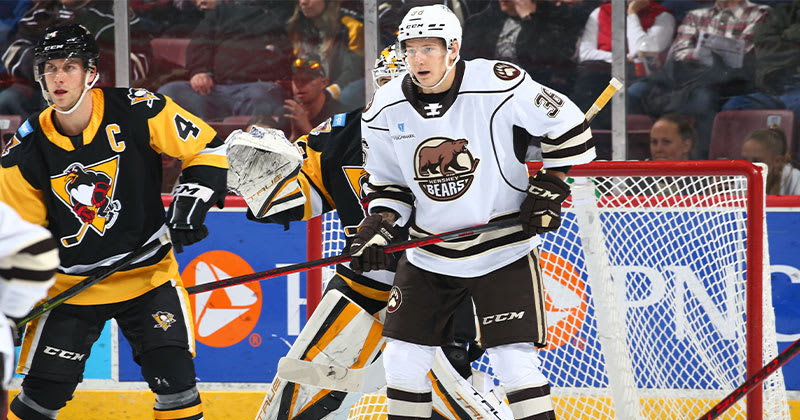 The Hershey Bears cruised to an 8-3 victory over the Wilkes-Barre/Scranton Penguins on Saturday night at GIANT Center. Eight different players tickled the twine for the Chocolate and White, and 14 different skaters registered a point. Mike Vecchione extended his point streak to eight games with one goal and two assists. The Bears eye a three-game weekend sweep on Sunday when they host the Rochester Americans at 5 P.M.

The Bears posted a crooked number on the scoreboard in all three periods, scoring three times in both the first and second frame, and closing out the night with two goals in the final stanza. Kale Kessy opened the scoring at 9:44 of the first period with his second goal of the season. Kessy executed an offensive rush to perfection from the left wing after burying a pass from Kody Clark. At 13:04, Clark turned a Penguins defensive zone turnover and doubled his team's lead to 2-0 with his fifth goal of the campaign. Clark finished the night with three points (1g, 2a).

Ryan Dmowski opened a 3-0 cushion for Hershey by blasting home his second goal of the season from the center point at 14:47. Before the frame expired, Wilkes-Barre/Scranton pulled to within 3-1 at 18:47 on a goal from Jordy Bellerive. Shots after 20 minutes were 12-10 Bears.

Tommy Nappier took over in goal for the Penguins to start the second period, relieving Alex D’Orio after 20 minutes. Mike Vecchione scored the eventual game-winner at 4:18 of the middle stanza, followed by a Bobby Nardella power play marker through a heavy screen at 8:26. Less than a minute later, Mason Morelli broke to the Penguins net and buried a breakaway chance at the 9:10 mark. Hershey's sudden 6-1 lead was cut to 6-2 by a Wilkes-Barre/Scranton power play goal from  Valtteri Puustinen at 11:19. Shots after 40 minutes were 25-24 Hershey.

The Chocolate and White scored a second power play goal at 4:10 of the third period courtesy of Axel Jonsson-Fjallby. Matt Bartkowski pulled the Penguins to within 7-3 at 10:34, but Shane Gersich completed the scoring line with a shorthanded goal at 19:06. Final shots on goal totaled 36-36. The Bears finished the night 2-for-5 on the power play and 4-for-5 on the penalty kill.

Ticket information for tomorrow's game between the Hershey Bears and Rochester Americans is available online at HersheyBears.com.