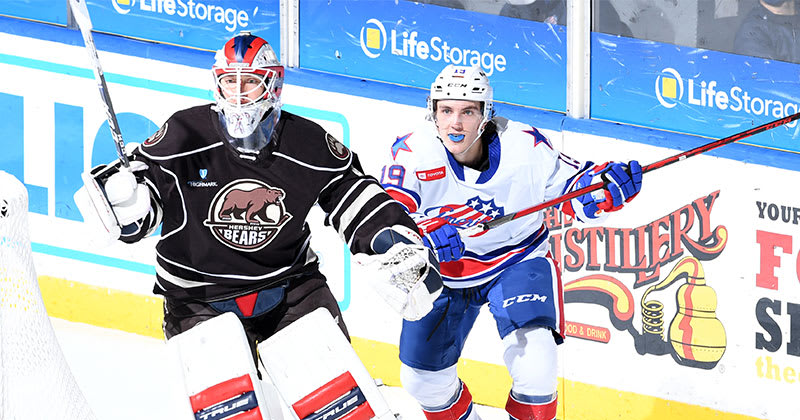 Amerks Down Bears 7-3 on Black Friday

The Hershey Bears dropped a 7-3 decision on Friday night against the Rochester Americans at Blue Cross Arena. Kody Clark scored the club's second shorthanded goal of the season, and Garrett Pilon and Mason Morelli both tallied in the final frame. Hershey's record shifts to 8-6-2-1.

Rochester jumped out to a 3-0 advantage after 20 minutes with two goals scored on the power play. Michael Mersch opened the scoring at 12:11 after blasting home a shot from between the circles past Pheonix Copley. Mersch tallied his second goal of the game at 13:39 on the power play. Ryan MacInnis added a goal on the man-advantage at 18:49 after executing a perfect deflection at the side of the net.

In the middle stanza, Sean Malone opened Rochester's lead to 4-0 with the eventual game-winning goal at 16:09. The Bears broke onto the scoresheet at 19:43 with a shorthanded goal from Kody Clark. On an odd-man rush with Joe Snively, Clark buried his third goal of the season from in tight. Shots after 40 minutes were 28-15 Bears with the Amerks leading 4-1.

Mason Jobst tallied for the Americans at 4:09 of the third period, but the Chocolate and White stormed back with a quick pair to cut their deficit to 5-3. Snively setup Garrett Pilon in the slot for his seventh goal of the regular season at 6:43. Pilon's tally also extended his team-best five-game point streak dating back to Nov. 10 versus Lehigh Valley. Only 1:14 later, Mason Morelli scored his second goal in as many games for the Bears. After being the overtime hero on Wednesday night against Providence, Morelli sniped a shot from the right circle at 7:56.

Jack Quinn and Mark Jankowski both responded for Rochester to round out a 7-3 final. Final shots on goal totaled 40-20 in favor of Hershey. The Bears went 0-for-5 on the power play and 6-for-10 on the penalty kill. Both teams combined for 110 penalty minutes.

The Hershey Bears return to action on Sunday, Nov. 28 to conclude the month of November against the Lehigh Valley Phantoms. Puck drop at GIANT Center is scheduled for 5 PM. Ticket information is available online at HersheyBears.com.