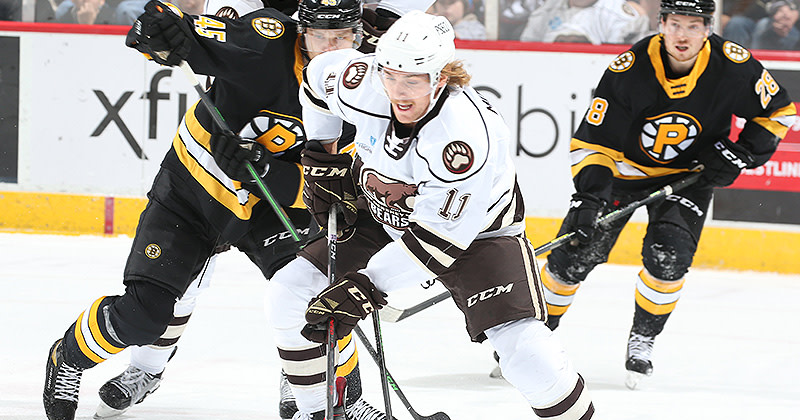 Bears Win in Overtime Upon Video Review on Thanksgiving Eve

Mason Morelli provided overtime heroics, and the Hershey Bears erased a 2-0 deficit to top the Providence Bruins, 4-3, in sudden-death on Wednesday night at GIANT Center. Morelli's goal marked his first in a Bears uniform as the Chocolate and White improved their record to 8-5-2-1.

Providence's 2-0 lead came courtesy of a late first period strike from Cameron Hughes at 18:07 and a Steven Fogarty 5-on-3 power play goal at 6:50 of the middle period. The Bears cut their deficit to 2-1 on a shorthanded goal from Joe Snively at 11:19. After a steal in neutral ice, Snively walked in on a breakaway and potted his seventh goal in his last seven games. Shots after 40 minutes were 19-16 Bears.

Hershey stormed out of the third period gate with two tallies before the stanza was 90 seconds old to grab control. Garrett Pilon converted on the power play only 29 seconds into the period, and Shane Gersich buried a cross-ice pass from Mason Morelli at 1:22 to provide the Bears a 3-2 lead.

Jack Ahcan scored for the P-Bruins at 17:59 to even the score at 3-3 and force sudden-death overtime. The extra frame set the stage for Morelli to bury the rebound of a Michal Kempny shot and walk off the game for the Chocolate and White after video review. Final shots on goal totaled 32-25 Hershey. The Bears finished the night 1-for-6 on the power play and 7-for-9 on the penalty kill.

Hershey returns to action on Friday, Nov. 26 with a 7:05 p.m. road puck drop against the Rochester Americans. Voice of the Bears Zack Fisch will have the call on the Bears Radio Network.