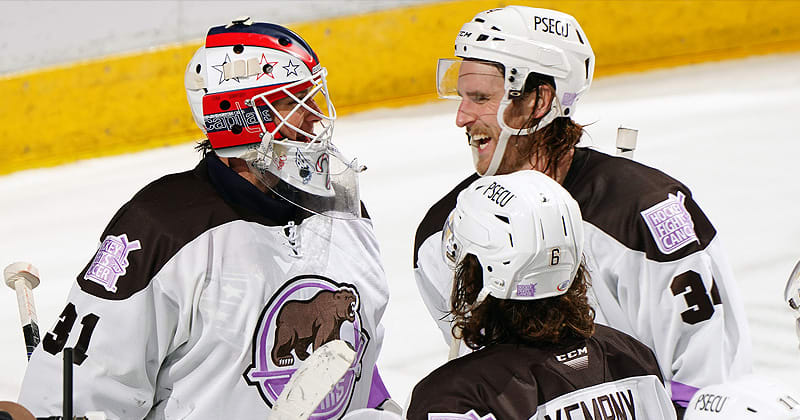 The Hershey Bears continue the 2021-22 season, presented by Penn State Health, this week with three games around the Thanksgiving holiday. The Bears are 7-5-2-1 and play a pair of games on home ice this week, hosting Providence Wednesday and Lehigh Valley on Sunday, while visiting Rochester on Friday night.

LAST WEEK'S RESULTS:
Saturday, November 20: Hartford 7, Hershey 3
The Chocolate and White surrendered five goals in the third period, falling on the road to the Hartford Wolf Pack, 7-3 last Saturday night. After falling behind 2-0, Hershey bolted out to a 3-2 lead in the middle frame thanks to goals from Shane Gersich, Mike Sgarbossa, and Dylan McIlrath. Gersich's marker was his first of the season, while McIlrath's tally was his first as a Bear. However, Hartford scored at 2:53, 3:57, 4:24, 8:26, and 14:13 of the third period to skate past the Bears.

Sunday, November 21: Hershey 4, Charlotte 2
Hershey bounced back on Sunday on Hockey Fights Cancer Night at GIANT Center, beating the visiting Checkers by a 4-2 score. Matt Moulson scored his first power play goal of the season at 11:23 of the second period to tie the game 1-1, and Mike Sgarbossa and Joe Snively each had three points to lead Hershey to the victory. The Bears power play went 2-for-5, and netminder Pheonix Copley turned aside 24 shots to earn the win.

SENSATIONAL SGARBS:
Forward Mike Sgarbossa has collected points in five of his past six games for the Chocolate and White, notching seven points (5g, 2a) in that stretch. With two goals and an assist on Sunday, Sgarbossa posted his second three-point game of the season. His helper on Sunday marked the 200th assist of his American Hockey League career. He currently leads the club in goals (8) and points (14).

GO JOE GO:
Joe Snively's big game last Sunday continued his strong play, and the winger has posted six goals over his past six games. Snively has also registered a trio of three-point performances in those past six contests. He leads the club with three power play goals, is tied for the team lead in assists (7), and is second on the club in goals (6) and points (13). The native of Herndon, Virginia is slated to play in his 100th AHL game on Wednesday night.

CALL THE COPS:
Netminder Pheonix Copley has won his past two starts for the Chocolate and White, and his victory over Charlotte on Sunday helped him move up in the Hershey Bears record book. Copley now ranks 7th all-time in victories by a Hershey goaltender, passing Braden Holtby. Copley will now try and chase down Rollie Boutin (83 wins) for 6th all-time in franchise history. The all-time leader in wins by a goaltender is Gordon "Red" Henry with 226. Copley's next appearance will be the 200th of his AHL career. He is 104-63-23 in his tenure with the Bears and Chicago Wolves since debuting in the league in 2014.

BACK IN ACTION:
A pair of injured Bears returned to the lineup last week. Defenseman Cody Franson returned from a four-game absence, and the veteran made his impact felt quickly, registering a pair of assists in just his second game back. The first-year Bear has collected eight points (2g, 6a) in his 11 games with the club this season. Additionally, defenseman-turned-forward Eddie Wittchow also slotted back into the lineup this past weekend after missing five-games with an upper-body injury.

THE WEEK AHEAD:
The Bears will play three games during Thanksgiving week, including the annual Thanksgiving Eve game on Wednesday versus Providence. This marks Hershey's second date with the Bruins this season, after Providence blanked the Bears at GIANT Center, 3-0, on Nov. 6. Hershey then heads to Rochester for a Black Friday game in the first matchup of the season between the AHL's two oldest active franchises. This marks Hershey's first visit to Blue Cross Arena since Oct. 23, 2019, a 5-1 loss for the Bears. This upcoming Sunday, the Bears return home to host rival Lehigh Valley for the third time this season at GIANT Center. Hershey is 1-1-0-0 versus the Phantoms.