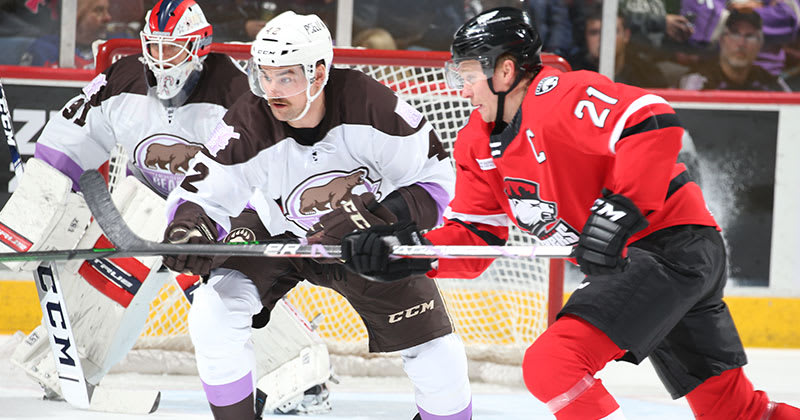 The Hershey Bears concluded the weekend with a 4-2 victory over the Charlotte Checkers on Sunday night at GIANT Center. Joe Snively and Mike Sgarbossa each recorded three-point nights, and the Chocolate and White improved their record to 7-5-2-1.

Hershey battled back in the second period after falling behind 1-0 in the opening frame. Cale Fleury tallied for the Checkers only 8:36 into the contest for the first period's lone marker. Shots on goal after 20 minutes were 9-4 Charlotte. Matt Moulson evened the score for the Bears at 11:23 of the second period with a power play strike. Cody Franson sent the puck near the net from the point, and Moulson's net from redirect eluded Charlotte goaltender Christopher Gibson.

The Checkers restored a 2-1 lead only 64 seconds later courtesy of Gustav Olofsson's first goal of the season at 12:27. Olofsson buried the rebound of a Zac Dalpe shot after Pheonix Copley made the initial save. Hershey responded once more before the period ended thanks to strong net front presence. Michal Kempny hit the goal post on a scoring chance, but Mike Sgarbossa converted on the rebound from the blue paint at 16:09 to tie the game at 2-2. Shots after 40 minutes were 18-14 Checkers.

The Bears pulled ahead in the third period with a power play goal from Joe Snively and eventual game-winner at 2:39. Off the rush, Snively snapped a perfect shot to the top shelf past Gibson for Hershey's second man-advantage marker of the night. Sgarbossa added an empty net goal at 18:22 to round out the 4-2 final. Shots on goal totaled 26-19 Charlotte. Hershey's special teams finished 2-for-5 on the power play and 4-for-5 on the penalty kill.