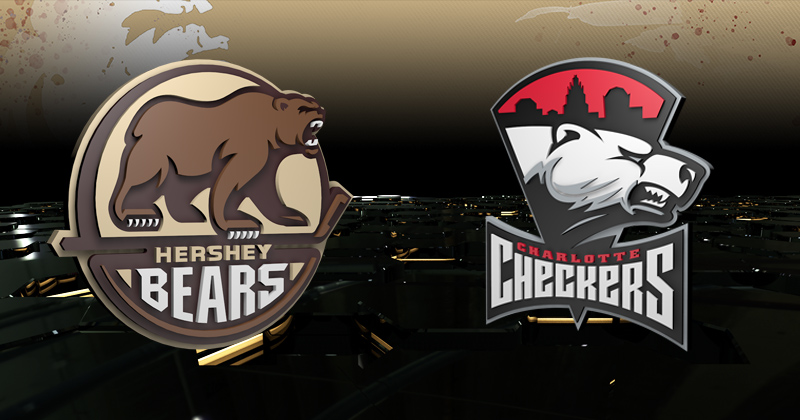 The Hershey Bears continue the 2021-22 season, presented by Penn State Health, as they host the Charlotte Checkers at 5 p.m. at GIANT Center. The Checkers are the NHL affiliate of the Florida Panthers and Seattle Kraken. Tonight's game is Hockey Fights Cancer Night, as the Chocolate and White will add lavender to their jerseys tonight for this special evening.

LAST TIME OUT:
Last night, the Hershey Bears led 3-2 heading into the third period in Hartford, but the Wolf Pack scored five times in the third period to down the Bears, 7-3 at the XL Center. After falling behind 2-0 through 20 minutes of play, the Bears rallied in the middle frame, getting goals from Shane Gersich, Mike Sgarbossa, and Dylan McIlrath to pull ahead. However, Hartford dominated the final frame, and Lauri Pajuniemi scored two goals just 1:04 apart to give the Wolf Pack a lead they would never relinquish. Jonny Brodzinski also had two goals and P.C. Labrie had a three-point game. Charlotte was idle yesterday, but are also coming off a loss. The Checkers dropped a 4-1 decision at Utica Friday. Max McCormick had the Checkers lone goal as Utica set a league-record with the best start to a season in AHL history at 12-0-0-0.

FINDING THE TWINE FOR THE FIRST TIME:
Despite the result last night, Hershey had a pair of players who found the back of the net for the first time this season. Only 1:33 into the middle period, Shane Gersich scored his first goal of the season for the Chocolate and White. It was his first tally since Apr. 21 of last season at Lehigh Valley. The marker was the 25th tally of Gersich's AHL career. Defender Dylan McIlrath also scored for Hershey, notching his first marker as a member of the Chocolate and White. It was his 24th career AHL goal and his first tally since May 7 while a member of the Grand Rapids Griffins.

TIGHTENING UP:
After a strong start to the season defensively, Hershey has hit a bump in the road of late. Hershey has lost three of its past four games, and in those four contests, the Bears have allowed 20 goals. Hershey is allowing 3.29 goals per game heading into tonight's date with the Checkers.

PLAYING CHECKERS AGAIN:
Tonight is already the Bears fifth contest versus Charlotte this season. Hershey is 2-2-0-0 versus the Checkers this year with Charlotte winning the last meeting one week ago at GIANT Center, 5-2. The Checkers had four power play goals in that contest. Hershey's Mike Sgarbossa has five points (2g, 3a) in the season series while Alex True leads the way for Charlotte with seven points (4g, 3a) versus the Bears. After tonight's meeting, the two teams will not play again until Mar. 2 at GIANT Center.